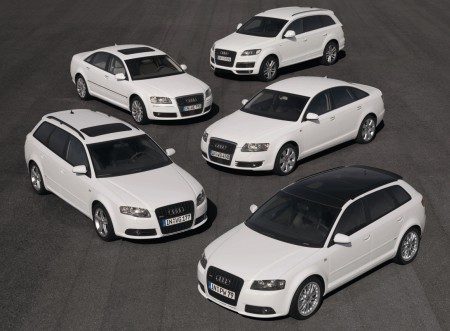 This new technology from Audi takes the TDI principle of diesel direct injection with turbocharging that has been proven a million times over and launches it into a whole new dimension. To do this, the diesel-engine development engineers at Audi have incorporated a whole raft of innovative measures into the latest TDI generation: the new piezoelectric common-rail system with an injection pressure of 2,000 bar, the extremely efficient exhaust gas recirculation and optimised turbocharging bring about a dramatic cut in untreated engine emissions. One of the highlights are the combustion chamber sensors that enable even more precise regulation of the combustion processes in the engine – this is the first time that such sensors have been fitted on any engine in the world, marking yet another Audi innovation.

Great potential for reducing fuel consumption all around the world

Thanks to their extremely low emission levels, these cutting-edge direct-injection diesel engines can be put into service anywhere in the world, even in the US state of California where the most stringent emissions limits are enforced. Compared to the average fleet consumption of petrol engines typically fitted in the USA, the TDI offers a fuel saving of as much as 35 percent. As a consequence, diesel technology can make a greater contribution to reducing the consumption of fossil fuels and emissions of environmentally harmful greenhouse gases than any other form of propulsion currently available. Audi will be marketing these new models in the USA and in Europe from the second half of 2008.

Perfecting the TDI forms part of Audi’s integrated technology strategy for further reducing emissions of CO2 and other harmful gases from all models. Apart from this, Audi is also counting on the tremendous potential held by its sophisticated combustion engines: with their direct-injection technology and turbochargers, the TFSI petrol engines – just like the TDI powerplants – distinguish themselves even today by virtue of fuel consumption figures which compare favourably to the competition.

As a result of this strategy, many Audi TDI and TFSI models will in future deploy an innovative power management system which capitalises on coasting and braking phases by recuperating and storing electrical power. Furthermore, a next-generation start-stop system is currently being developed which lives up to Audi’s standards of comfort.

Hybrid systems for a number of models

Nevertheless, there may also be a call for a hybrid system designed for individual markets and to meet specific requirements. Audi is developing hybrid systems for a number of model series and will put them into series production wherever it sees this as producing significant benefits for customers. Audi unveiled the Audi Q7 hybrid study with an electric motor integrated into the driveline between engine and gearbox back in 2005. Designed as a “full” hybrid, as it is known, the Audi Q7 can run on either the petrol engine or the electric motor alone or be powered by both in unison. During phases when the vehicle is coasting or braking, kinetic energy is converted into electrical energy, fed to the battery and then transformed into propulsive power as and when required.

Fuels have a decisive role to play with regard to future reductions in CO2. Apart from ethanol or natural gas, the primary energy sources in question here are the next-generation fuels extracted synthetically from biomass or natural gas. These customised fuels improve the combustion processes inside the engine, resulting in a far healthier emissions balance sheet.

Of particular interest in this respect is SunFuel which is made from biomass. When this fuel combusts, it releases no more carbon dioxide than the plants which went into making it would have extracted from the atmosphere beforehand. The first facilities for industrial-scale production of these fuels are currently being built. Audi is giving its full backing to this integrated approach for better fuels under the umbrella of the Volkswagen Group.

Alternative fuel types are gaining in importance around the world. Natural gas, for example, is being used increasingly in a number of countries as a more cost-effective energy source with a lower CO2 content. Here, Audi has devised a concept for using CNG (Compressed Natural Gas). It is based on the TFSI engine and retains such strengths as its mighty pulling power even when running in natural-gas mode. The reduction in CO2 emissions of up to 20 percent in CNG mode can therefore be enjoyed without having to compromise on driving pleasure in any way. Moreover, the ingenious packaging still allows full use to be made of the luggage compartment and the vehicle’s versatility despite the addition of the natural gas tank.

The same applies to the ethanol drive system from Audi. It is designed to run on fuel consisting of up to 85 percent ethanol – again without any loss of dynamism or sportiness. And yet, the CO2 output of such a drive system is around 75 percent lower when running on second-generation bioethanol than when it is burning conventional petroleum-based fuel.
The driver’s crucial influence

Audi will continue to demonstrate its renowned “Vorsprung durch Technik” to the customer with all manner of technical solutions. It goes without saying, however, that it is the drivers themselves who bear a large part of the responsibility for driving in a manner that burns less fuel. The individual driving style can influence fuel consumption and, as a result, emissions by as much as 30 percent – without any great difference in speed or dynamism. Driver awareness and attentiveness are the decisive factors here. Audi will additionally provide support systems that help drivers modify their driving style for optimum fuel consumption. One example of such a driver aid is the gearshift indicator that is already included as standard on the e models and the new A5 and displays the optimum gear for the current driving situation.

Extra efficiency at the push of a button

Audi has already unveiled a vehicle that gives drivers the option of selecting an especially fuel-efficient mode for certain situations at the push of a button with its Cross Coupé quattro study. In the “efficiency” mode, the engine and the gearbox mapping are switched over to a more economical operating programme, the power draw of the main consumers and comfort modules is restricted, and the cruise control system is programmed to give priority to low fuel consumption. This mode is selected intentionally by the customer and is accompanied by a slight reduction in both power and comfort. Apart from this, as the navigation system’s road data becomes even more precise in future it will be used for particularly economical routing and vehicle guidance.