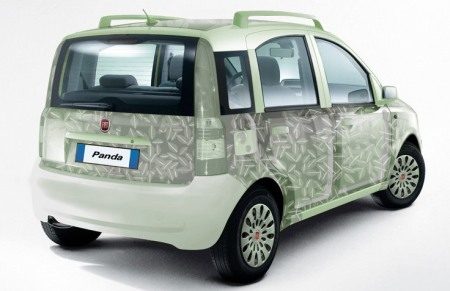 The Frankfurt Show hosts the world debut of the Panda Aria concept car, which illustrates Fiat’s viewpoint of cars with a low environmental impact. This concept car represents the last frontier achievable in terms of emissions and consumption, by synergetically associating sustainable technologies already in existence or soon to be industrialised, a practical demonstration of Fiat’s commitment to the environment.

The concept car combines an innovative powertrain architecture – represented by the new SGE 900 cc Turbo twin-cylinder engine, equipped with the Multiair® system for dual petrol/methane-hydrogen fuel management, MTA gearbox and Stop&Start device – with the adoption of eco-compatible materials (recycled, recyclable or of natural origin) both outside and inside. The interior is upholstered with natural fibres (cotton and linen), woven coconut fibre and biodegradable elements, while the exterior panelling is made of semi-transparent eco-resin and the structure is treated with opaque ‘totouch’ paint.

It is all made even more interesting by the minimisation of the energy absorbed by the auxiliary units on the vehicle and engine (for example the low consumption climate control unit), by a reduction in the vehicle’s weight (downsizing of the engine, the use of new generation, high tensile steel, methane storage cylinders made of high performance steel and carbon fibre) and the adoption of experimental Pirelli ‘ultra-green’ tyres with new compounds and new AOF (Aromatic Oil Free) textile weaves which guarantee limited drag but do not detract from dynamic safety performance (stopping distances and good handling on wet and dry roads).

And finally, the Panda Aria is fitted with a telematic system, based on the Blue&Me architecture, that is wired to adapt to new infomobility services. It also incorporates original software which allows the consumption and emissions of each trip to be recorded on a USB pen drive, through the USB port of the Blue&Me system, so that the customer’s driving style can later be analysed on a computer, and he can learn how to make his driving more ‘eco-friendly’.

The Panda Aria is equipped with the new twin-cylinder 80 bhp turbo engine from the SGE family, in this version with Multiair® petrol-methane fuel supply system. This sophisticated fuel management system is already designed to operate with a mixture of methane (70%) and hydrogen (30%). The twin-cylinder engine is combined with a Stop&Start device and the innovative MTA (Manual Transmission Automated) gearbox.

The innovative twin-cylinder engine developed by Fiat Powertrain Technologies is the outcome of a philosophy that focused on reducing fuel consumption and, as a consequence, CO2 emissions, in respect of future Euro 5 and Euro 6 emissions standard, with the same performance as a large engine.

The concept behind this new engine is the downsizing from a conventional 4-cylinder engine to a 2-cylinder turbocharged engine that incorporates the innovative Multiair® electronic inlet valve control system. In addition to advantages in terms of consumption, the twin-cylinder engine also results in a 20% reduction in weight and 25% in volume inside the engine bay compared to a 4-cylinder engine with the same power output.

The maximum output achievable by the new twin-cylinder engine, in the Mono Fuel petrol version is 105 bhp (a 65 bhp aspirated version, also equipped with the Multiair® system, is now under development). The SGE engine family adopts a crankshaft balancing system that significantly reduces vibration and noise levels compared to other two and three cylinder engines.

The innovative Multiair® system controls the air in controlled-ignition petrol engines without the usual throttle valve, and therefore with a greater degree of flexibility than mechanical timing systems.

This electrohydraulic valve activation technology is based on the insertion, between the camshaft and the engine inlet valve, of an amount of oil (high pressure chamber) that can be varied by a valve, which in turn is controlled by a specific electronic control unit.

This allows the raising profile of the valve to be modified in response to the request for air from the engine and to the running speed. Different strategies can be employed (Early inlet valve closing – EIVC, Late inlet valve opening – LIVO, or Multi-Lift) to optimise combustion efficiency, with considerable benefits in terms of power output, torque, consumption and emissions. Another advantage of this system is the fact that the air pressure upstream of the valves is always constant. This characteristic, combined with the high system activation dynamics (from partial load to full load in one engine cycle) allows the torque response of the engine to be increased without any delay, on both an aspirated and a turbocharged engine, increasing the ‘fun to drive’ factor.

On the Panda Aria the new twin-cylinder engine is combined with a dual fuel management system, with petrol and a mixture of methane (70%) and hydrogen (30%); this solution also helps to reduce polluting emissions by guaranteeing more efficient, complete combustion. It also makes it possible to increase the engine’s thermodynamic efficiency and to achieve combustion stability values that are better than those possible with methane alone, in certain operating conditions. This means that methane-hydrogen vehicles represent a step forward for an existing technology that is open to further refinement and new applications. Methane-hydrogen mixes can thus represent a ‘bridge’ solution in the medium term, while infrastructure is developed to guarantee hydrogen supplies in the future.

The Panda Aria is equipped with the ‘Stop&Start’ system that turns the engine off temporarily and starts it again, when the engine is idling and the vehicle is stationary: in this situation, typical of congested town traffic and queues at red lights, and when control logics allow it, the system automatically turns the engine off thus saving a considerable amount of fuel (a 10% reduction in consumption in the urban cycle). The instant the brake pedal is released or a gear is engaged, the system immediately re-starts the engine, which responds promptly to the driver’s demands.

The Stop&Start system combined with the MTA gearbox ensures optimal management of gear changes, and excellent mechanical efficiency. The automated transmission lays the foundations of the ‘intelligent’ management of the on/off status of the engine. By controlling the clutch, the system allows the internal combustion engine to be cut off from the transmission whenever traction is not needed and the engine can be turned off.

The combination of these solutions, which have been developed by the Fiat Group (Fiat Group Automobiles, Fiat Powertrain Technologies and Centro Ricerche Fiat), are already in existence or will soon be available on regular and future production models, guaranteeing a drastic reduction in emissions. For example, CO2 emissions on the Panda Aria concept car have been cut to a record low of 69 g/km.