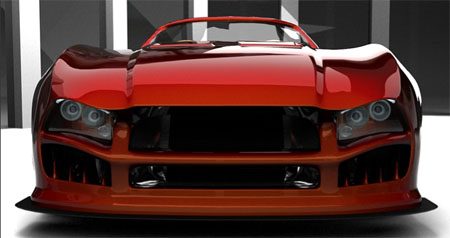 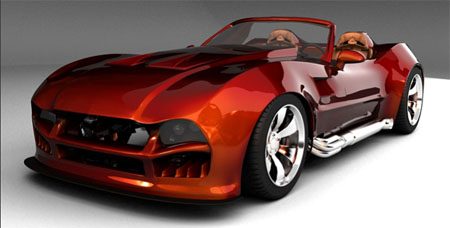 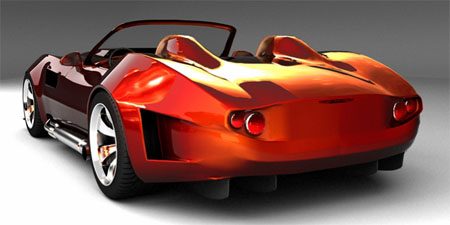 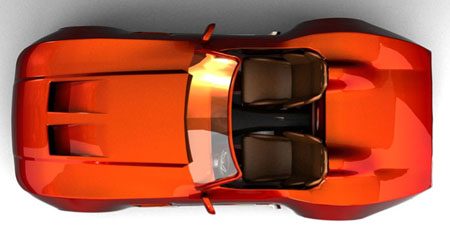 This car was designed to capture the look and feel of old school automobiles with a hint of modern touches. This is a full performance car built with modern advancements. Big V8 fuel injected power plant up front riding on a tubular hybrid chassis with full independent suspension. The addition of belly pans and rear splitters are added to keep down force up without the need of a giant rear spoiler.

Engines types range from Roush 400HP to 500+HP. The B1 engine compartment is designed to accommodate most small block engines including the newer ford modular 4.6L engines.

Full steel chassis consisting of tubular roll cage affixed to a solid ridged box steel frame. The tubular roll cage is hidden from view and protects the driver and passenger sides with the addition of two hoop style bars to protect in case of roll over.

Full Vinyl Ester hand laid fiber glass body that is Light weight in design with functional trunk doors and hood. The hood is a clam shell style hood that flips forward to allow for easy access to the engine compartment.

Who is the Blade’s designer?

The Blade idea and design was conceived by Neal Bailey, age 35, in July 2007.

What is the concept behind the Blade?

There were several ideas that went into the Blade Concept. First, I looked at just about every sports car on the road, both old and new to determine a style that would fit in with today’s cars. The idea was to incorporate modern and classic styling into a single flowing design. Many days were spent considering cars on the road and sketching ideas that came to me while sitting in traffic. The concept literally started from the ground up. Inspired by the legendary Shelby Cobra, the idea was to have something that had the raw power and look of the classic 60s cars, but with today’s suspension technology and performance characteristics of a modern sports car. Once an idea was conceived I designed the concept in CAD.

Many considerations went into the CAD development. The chassis was designed using an existing chassis from a Replica Cobra but with several modifications to accommodate a modern adjustable independent front and rear suspension. After the chassis was designed, work began on the body and the overall look of the car. I wanted to make it sleek, sexy and aggressive. From the very beginning there was one specific goal for this car; that was to make sure that tall people could fit in it comfortably and look good as well. Since I am 6’4″ it has always been difficult to fit into small sports cars. And not to mention the ridiculous look of a driver’s head peaking over the front windshield. Special precautions were taken to design the car in such a way that anyone who is 6’6″, possibly taller can easily fit into the car. I expanded the engine compartment to accommodate most engine and trans combinations, including enough room for big block and modular engines.

What was the inspiration for the Blade?

The primary inspiration for the car has to be attributed to the Classic Shelby Cobra. I have always wanted a Cobra, although it’s ironic, that when I finally got a replica of one, I immediately wanted to design and build my own version of a dream car. Although the Cobra was the main inspiration, there were several other car designs that helped me grasp the modern perspective.

Will the Blade be available over seas?

Another key factor for this car beside fitting tall folks… is that we would like to provide the Blade over seas. The car is being developed to accept both left and right hand drive versions. Therefore we are working hard to meet European standards for this type of car.

What’s left to do before we see a rolling prototype?

There is still a ways to go. We are in the early stages of constructing the first prototype. Plans are to have it rolling by mid 2008.

When should we see the Blade for sale?

It will be available once the car has been track tested and performs as expected with all the bugs worked out. The plan is to have it for sale by end of 2008.

How much do you expect the car to sell for?

At this time price has not yet been determined… the plan is to make it affordable! We do not plan to sell it for supercar prices, that’s for sure. Pricing will be released once it’s closer to the molding process, at that point, the cost analysis should be more easily determined.