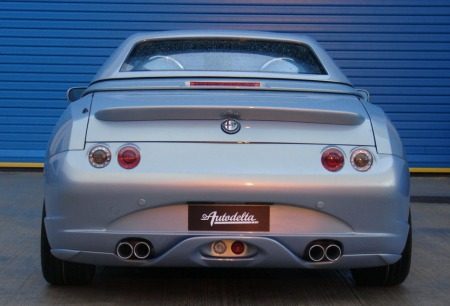 Under the surface the changes were inspired by our bespoke V6 Spider version, with the fitting of the current generation Rotrex supercharger conversion, which raises power from 240 to 341 bhp. Engine changes included upgrading of the fuel injectors, engine mapping and a new free-flow stainless steel exhaust system, which was developed in conjunction with Ragazzon and finishes in distinct quad tailpipes. Autodelta’s bespoke Limited Slip Differential was fitted to allow the additional power to be smoothly and effectively transferred to the wheels.

Height adjustable coilovers from the Autodelta Sportline range were fitted to further cope with the major power increase, while bigger brakes (330 mm ventilated front discs) and larger 4-pot Brembo calipers stop the car effectively. Two more of our technical partners were involved in the project: the car rides on OZ Ultralight Botticelli wheels fitted with Dunlop Sport SP Maxx tyres, which have been developed for Autodelta.

The styling for this particular Spider required a very personal touch. The car’s owner desired a very extreme look, which called for an individual custom styling project. “We thrive on creating a car this extravagant,” comments Jano Djelalian. The project perfectly demonstrates Autodelta’s ability to custom-build a car, tailor-designed to meet a single owner’s own, highly individual, requirements.

Autodelta’s styling team applied their talent on every conceivable area of the car. The front, side and rear received design changes, including the fitment of a high-quality Autodelta Detachable Hardtop.

This particular project was inspired by historical show-stopping prototypes such as the open-top Pininfarina Super Flow of 1956 (pre-study to the legendary ‘Duetto’ Spider model) and the Alfa Romeo Nuvola concept car of 1996. The form-language of the completely bespoke rear bumper and splitter, including the styling of rounded tail-lights, is an area which mostly ties in with the Nuvola. The rear splitter design also traces other extravagant models in Alfa Romeo’s illustrious open-top history, including the sinuous 1931 Alfa Romeo 6C 1750 GS “Flying Star” by Carrozzeria Touring.

In a tribute to the ground breaking Pininfarina Super Flow, and the huge impact it had on Alfa Romeo’s style thinking in the following decades, we have christened this unique one-off car the “Autodelta Spider Superflow”; with the ‘Super’ part of the name also being reminiscent of the traditional denotation for Autodelta’s supercharged cars.

The front of the Spider introduces a new splitter which enhances the form of the Alfa Romeo grille. An inverted “V” section in the centre adds to the dynamic thrust of the styling direction, providing an extra focal point at the base of the Alfa shield. This solution enhances the feeling of speed. Intake sections on either side of the V-form have been incorporated in the traditional Alfa Romeo style with a centre-section intelligently forming the aerodynamic spoiler.

New flank sections behind the front wheelarches include specially designed air vents providing a more technical appeal to this section of the Spider’s styling.

The completely bespoke rear bumper also features dual circular lighting clusters with LED technology. These are the same units fitted to the awesome Maserati MC12 racing car. Additional units for the reverse and fog lights are positioned centrally in the lower section of the bumper in-between the quad exhaust outlets. The exhaust outlets themselves are housed within the bumper for an optimum finish.

A ducktail rear spoiler adds to the sportive feel of the rear styling.

New side mouldings have been developed and present a rising crease which is matched at the rear bumper. Autodelta’s Styling Centre provided much attention towards how the individual styling components cosmetically interact with each other, ensuring a logical cohesive design.

Made by Autodelta Styling Centre, the Spider Detachable Hardtop is produced to the most exacting tolerances using a variety of materials. The Hardtop uses high-quality components such as toughened tinted safety glass, hardware and Alfa Romeo original equipment rubber seals. The Hardtop is also colour-coded to match the vehicle colour.