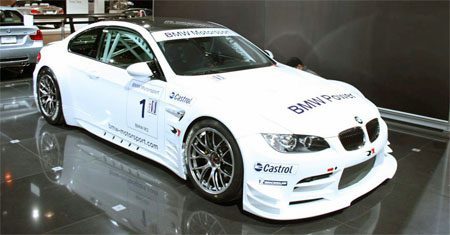 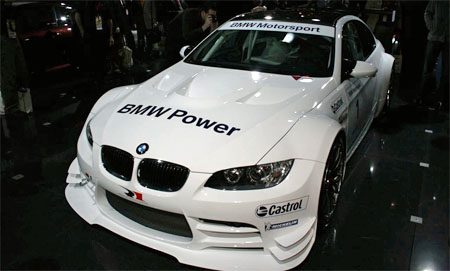 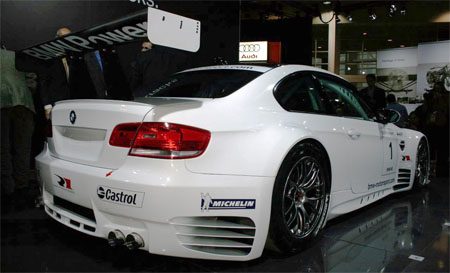 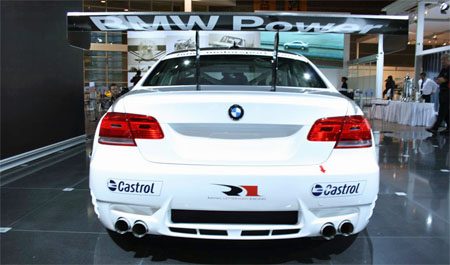 BMW RETURNS TO ALMS WITH THE LATEST GENERATION BMW M3

BMW of North America to partner with Rahal Letterman Racing for 2009 season.

Chicago, IL/Woodcliff Lake, NJ – February 6, 2008… BMW presented the racing version of the new BMW M3 at the Chicago Auto Show. Powered by a 485 bhp eight cylinder engine, this impressive race car has been designed to compete in the American Le Mans Series (ALMS) beginning in 2009. The car is based on the fourth generation of the BMW M3, the high-performance sports car produced by BMW M GmbH.

BMW Motorsport Director Mario Theissen says: “With the sporting genes of the production BMW M3 being clearly evident, developing a racing version of the car was the next logical step. The fact that the road-going vehicle is fitted with a V8 engine as standard provided us with an ideal base. However, the BMW M3 is more than a race car, it has achieved legendary status amongst race fans across the globe. I am convinced that this unique story of the BMW M3 racing cars will now be expanded upon by the addition of further chapters.”

BMW’s 2009 entry into the American Le Mans Series will be driven by a partnership between BMW of North America, LLC and Rahal Letterman Racing, co-owned by US motorsport legend Bobby Rahal.

“We are very pleased to be returning to the American Le Mans Series with our latest generation BMW M3,” states Tom Purves, Chairman and CEO, BMW of North America. “Sports car racing has been part of BMW of North America’s history practically from day one. Just two weeks after the company was incorporated in March 1975, a BMW CSL won the Twelve Hours of Sebring. We are confident that the fourth generation M3 will continue the legacy of its two predecessors which combined to win six manufacturer’s championships over nine seasons in US sports car racing. As it has been in the past we believe the ALMS is the ideal venue to showcase the potential of the newest BMW M3.”

Echoing that sentiment Bobby Rahal adds, “BMW has an illustrious racing heritage. Rahal Letterman Racing is eagerly anticipating, not only becoming part of that heritage, but helping to enhance it. Our dedication to this project will be without equal and we look forward to racing at the front of the grid with BMW in the years to come.”

Martin Birkmann, Motorsports Manager, BMW of North America, adds: “We are very excited to announce our return to the American Le Mans Series with the 4th generation M3 at the same time as the road car hits the BMW showrooms. We are also excited about our partnership with Rahal Letterman Racing. The ALMS offers racing where we can compete against the finest and most renowned automotive brands from Europe and the US. Motorsport is deeply ingrained in the BMW DNA and we are pleased to partner with an organization which shares that same heritage. Rahal Letterman Racing is the perfect partner to be behind the wheel of our new BMW M3 racing effort.”

In the course of developing the race version of the BMW M3, BMW’s engineers were faced with an ambitious task: to improve upon the sportiness of an already sporting car. A better base would, though, be difficult to find. In standard form the vehicle delivers powerful dynamics and sporting aesthetics. Thanks to an eight cylinder engine producing 414 bhp, BMW’s customers are provided with a unique driving experience.

In order to enable the BMW M3 to make full use of this performance on the race circuit, the experts in Munich have not concentrated solely on the engine, but have race-tuned the chassis as well. The race version of the BMW M3 is wider and significantly lighter than its production equivalent, enabling it to perfectly transmit the power of its V8 to the track. Widespread use of carbon-reinforced plastic (CRP) provides proof of substantial weight reduction. As with the production version, the race car’s roof is manufactured from this high-tech material.

The race version of the BMW M3 is clearly aimed at the top echelon of motorsport. As such, it is no surprise to discover that in the course of its development, begun in mid-2007, numerous Formula One techniques were applied. These include computational fluid dynamics (CFD) and wind tunnel analyses, both of which have ensured the best possible aerodynamic package for the BMW M3.

Intelligent control systems have been incorporated throughout the BMW M3. The POWER400 control unit actuates all the accessories fitted to the car, such as lights, wipers, etc., via two bus systems. Traditional relays and fuses are thus eliminated, ensuring considerable weight saving, improved reliability and ease of application. The functions of the BMW P65 engine are managed by an ECU 408 electronic control unit, developed in-house by BMW Motorsport. The software and applications, too, have been developed by the experts in Munich.

An intensive test program, during which the performance of the race car will be honed by BMW Motorsport, looms for the BMW M3 over the coming months. Development drivers will be BMW works drivers Andy Priaulx (GBR), Jörg Müller (GER) and Augusto Farfus (BRA), currently racing in the FIA World Touring Car Championship (WTCC). The aim is, after all, for the BMW M3 to be an immediate front-runner upon its comeback to the American Le Mans Series.

BMW’s return to race track coincides with the fourth generation M3’s entry into North American showrooms, a pattern familiar to those eager to follow the newest chapter in BMW’s storied racing history.

After the CSL’s, the 70’s ended with the 320 Turbo. Known affectionately as the “Flying Brick” the flame-throwing coupes delighted sports car racing fans with their signature exhaust fire. The program also added reams of data to BMW’s turbocharging technology, information that would help a BMW-powered Brabham win the 1983 Formula One World Championship.

In the late 1980’s BMW of North America entered IMSA’s top prototype category with the BMW GTP. The program netted only one win, but added incalculable experience to the men and women responsible for racing here in the US. When the second generation M3 debuted in 1995, the company was ready for a major effort in production car racing that continued through 2006 and the third generation M3.

When the checkered flag fell on the last race of the 2006 season, BMW of North America wrote the final page of the most successful chapter to date of its 31-year motorsport story. From 1995 through 2006, BMW of North America’s M3 racing program drove to 53 wins in 118 races entered, adding 14 championship trophies to corporate display cases and a shine on the Roundel like never before.

BMW can look back on numerous successes and titles in the ALMS. The BMW V12 LMR prototype won the inaugural ALMS race in 1999 at the Twelve Hours of Sebring. In 1999 and 2000 the BMW V12 LMR went on to score six victories. For 2001 BMW switched to the GT Class, winning everything in sight with the BMW M3 GTR, which was developed specifically for the ALMS: BMW works driver Jörg Müller claimed the drivers’ championship, Team BMW Motorsport took the team title and BMW won the manufacturers’ championship in the company’s most important market.

The American Le Mans Series is far from virgin territory for BMW. During both 1999, the series’ inaugural season, and the following year, the company celebrated major successes in North America. Under the management of the Schnitzer Team’s Charly Lamm, five BMW drivers scored a total of six victories with the 580 bhp BMW V12 LMR. In 1999 the impressive BMW V12 LMR simultaneously won the very race which served as inspiration for the ALMS: the Le Mans 24 Hour Race.

In 2001 BMW deployed a new car. For the third ALMS season a switch was made from the Prototype category to the GT class using the BMW M3 GTR, a totally new development powered by an eight cylinder engine delivering 450 bhp. Two operations, Team BMW Motorsport from Germany and the US-domiciled BMW Team PTG, entered two cars each. The Team BMW Motorsport entries were driven by Jörg Müller/JJ Lehto and Fredrik Ekblom/Dirk Müller respectively, with Hans-Joachim Stuck and Boris Said, and Niclas Jonsson and Bill Auberlen doing driver duties in the Team BMW PTG Team-entered cars.

Ultimately successful 2001 season does not start according to plan.

The 2001 season did not, though, start according to plan. At the opening race on 4 March in Fort Worth, Texas, the BMW M3 as raced during the previous year was deployed. Stuck and Said gave it their all, and placed third for BMW Team PTG. Approximately two weeks later things looked up: at the Sebring 12 Hour Race in Florida the BMW M3 GTR celebrated its track debut having undergone only cursory shakedown tests due to time pressures. However, Müller and Lehto immediately fired a shot across the bows of the opposition: they crossed the finish line of the classic race in third place, thereby ensuring BMW’s first podium place with the BMW M3 GTR. “That was the car’s first test drive under racing conditions,” said team manager Charly Lamm.

Team BMW Motorsport thereafter crossed the Atlantic in order to amass more experience by taking in two European Le Mans Series events of 2.45 hour duration each at Donington (Great Britain), and in Jarama (Spain). Although the team suffered a double retirement in England, the Jarama race ran totally to plan: Team BMW Motorsport celebrated its first one-two via Ekblom/Dirk Müller and Lehto/Jörg Müller.

After its European sojourn, Team BMW Motorsport returned to the USA. Together with Team BMW PTG, Charly Lamm’s operation fought for points and placings at California’s Sears Point Raceway. Lasting almost three hours, the race culminated in a quadruple success for BMW: Lehto/Jörg Müller won from Said/Stuck, with Ekblom/Dirk Müller and Auberlen/Jonsson following them across the line. The next race, at Portland, Oregon, saw Said/Stuck win, with Team BMW Motorsport taking third and fourth places.

The extent of the domination of the BMW teams became clear during the final four rounds of the series: in Mosport (Canada), Mid-Ohio and Laguna Seca Lehto/Jörg Müller won from Ekblom/D Müller; the season finale, the ‘Petit Le Mans’ at Road Atlanta, saw Auberlen/Said/Stuck win. Dirk Müller and Jörg Müller placed second.

Thus the BMW teams ended the 2001 ALMS season with four consecutive one-two victories. BMW drivers mounted the top step of the podium seven times, with Jörg Müller celebrating the most: he amassed 185 points to take the drivers’ title by five points from team-mate JJ Lehto. The teams’ classification was won by Team BMW Motorsport (184 points), with BMW Team PTG placing third with 170. The Manufacturers’ Championship went to BMW with 198 points.

In total the BMW teams had contested ten races each. For Team BMW Motorsport in particular, participation in the series proved a major logistical challenge: the team travelled nearly 7,000 miles within Europe and a further 28,000 miles in North America as its crew travelled from race to race. A regular paddock and permanent workshop facilities were as sorely missed as were home town comforts.

“The technicians, the teams and the drivers performed magnificently,” said BMW Motorsport Director Mario Theissen after the season finale. “The late project start, combined with the logistical challenges of the North American races, made it extremely demanding.” The effort was, though, justified: the BMW M3 GTR came through its baptism of fire with flying colors.