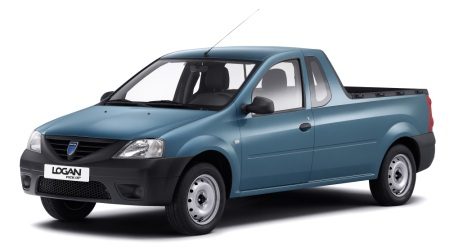 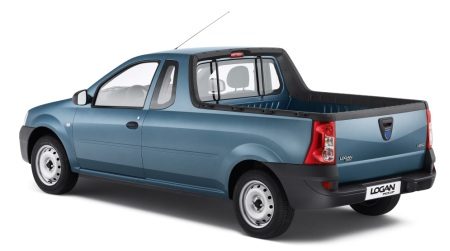 Robust above all
Dacia Logan Pick-up follows the highly successful example set by its stablemates — Logan, Logan MCV and Logan Van— to extol the virtues of straightforward, robust design. Interior materials, for the dashboard, door panels and upholstery, are sturdy and durable, an important consideration for a working vehicle like Dacia Logan Pickup.
Exterior features are as found on the other Logan models: metal panels protected by wax injection of hollow sections, systematic application of sealing mastic for exterior cabin joints, and reinforced anti-chip protection for the substructure.

Bodywork corrosion protection on Dacia Logan Pick-up includes a galvanized roof and door panels, while some versions have wide protective door mouldings. Other protective features carried over on Dacia Logan Pick-up include raised suspension, higher ground clearance, and a protective skidplate under the powertrain. Dacia Logan Pick-up also gets the new dustproofing system for gearbox and transmissions, introduced on Dacia Logan MCV.
Dacia Logan Pick-up’s most salient feature – the pick-up bed itself – is designed to last. It carries a payload of up to 800kg, and comes as standard with a protective surround that prevents damage to the bodywork during loading operations, and easily resists loads up to 100kg. The tailgate is designed with robustness and safety uppermost in mind, and will resist loads up to 300kg when open, a capability usually only found on larger pick-ups. The bed floor, sides and cabin partition are especially corrosion-proofed and there are two ducts at the front to drain out rainwater.

Safety first
Dacia Logan Pick-up has all the active and passive safety features of Dacia Logan MCV. Like all vehicles in the Logan range, it is built on the B0 platform, derived from the Renault-Nissan Alliance’s B platform, as used by Renault Modus, Renault Clio II, Renault Clio III and Nissan Micra. The suspension has been designed for sound, balanced response under all circumstances. The front suspension uses the MacPherson layout featured on Renault Clio II, with wishbone arm and non-damped cradle. As on other B-platform vehicles, the reinforced rear suspension uses a programmed deflection H-type torsion beam, plus coil springs and extended-travel vertical dampers, consistent with the poor road conditions on many of the car’s markets. There’s a front antiroll bar as standard.

Dacia Logan Pick-up has disc brakes at the front and drum brakes at the rear. Versions with ABS use a latest-generation Bosch 8.0 system with electronic brake distribution, as fitted on Renault Mégane II. Passive safety systems on Dacia Logan Pick-up include a driver’s airbag as standard, plus a passenger’s airbag on option. The restraint system comprises threepoint seatbelts. Dacia Logan Pick-up reaps full benefit from Renault engineering expertise in impact resistance and kinetic energy dissipation. The engine compartment layout is designed so that the content will tend to stack up under frontal impact conditions. The dashboard material has a highly absorbent polypropylene honeycomb structure to minimize the risk of knee injury on impact. Enhanced lower limb protection is afforded by under-foot padding on driver and passenger sides. Meanwhile, in side impacts, the B-post, seats (with enhanced lateral resistance) and door padding combine to provide effective hip protection.

Reliable engines
Dacia Logan Pick-up comes with a choice of three engines from the Renault group powertrain bank: one petrol engine (1.6 MPI) and two versions (70hp and 85hp) of the 1.5 dCi diesel unit. The 1.6 MPI petrol engine develops peak power of 64kW (90hp) at 5,500rpm and peak torque of 128Nm at 3,000rpm. It is rugged and easily serviced, important criteria for a utility vehicle. And it yields very creditable torque from low engine speeds. The first three gear ratios are short, for good pullaway and acceleration at low speeds or when heavily loaded, while the top two speeds are staged for acoustic comfort and fuel economy. On a combined cycle, Dacia Logan Pick-up with the 1.6 MPI consumes a very reasonable 8.1 litres per 100km.

The technologically advanced 1.5 dCi diesel engine enjoys benchmark status in its category, and features a second-generation common-rail direct injection system that combines responsive performance with very low fuel consumption. The 50kW (70hp) 1.5 dCi version produces peak torque of 160Nm at 1,700rpm, with 85% of peak torque available between 1,500 and 3,500rpm. With the 63kW (85hp) version, peak torque is 200Nm from 1,900rpm, with 90% available from 1,500rpm. The five-speed gearbox, lubricated for life, is specially developed with longer ratios to make the most of the 1.5 dCi’s torque. Pullaway and acceleration are crisp and sharp, even with a loaded vehicle. Both 1.5 dCi versions are ideally suited to a working vehicle like Dacia Logan Pick-up, and they give very reasonable fuel consumption and CO2 emission figures. With the 85hp 1.5 dCi engine, Dacia Logan Pick-up consumes just
5.2 litres per 100km (combined cycle), with CO2 emissions of 137g/km. Because these figures are very low for a vehicle with such a substantial loading capacity, Dacia Logan Pick-up makes a significant contribution to one of the undertakings of the Renault Commitment 2009, namely to sell a million vehicles that emit less than 140g of CO2 per km by the end of the business plan. With its 50-litre fuel tank, Dacia Logan Pick-up 1.5 dCi 85hp also sets a benchmark for range in this vehicle category, approaching 1,000km.

The petrol and diesel engines powering Dacia Logan Pick-up all benefit from the latest developments in Renault group engine technology, bringing greatly extended service intervals. Owners of the 70hp or 85hp 1.5 dCi diesel versions will need to bring their vehicles in for servicing every 15,000km (or every year) instead of every 10,000km, making six oil changes instead of ten per 100,000km. And the petrol version only needs serving every 20,000km (or yearly) instead of 15,000km. This improvement brings a spectacular reduction in servicing costs, of direct benefit to Dacia customers in general and business users in particular.