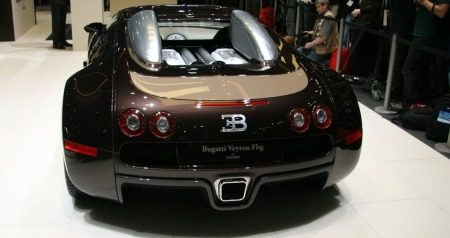 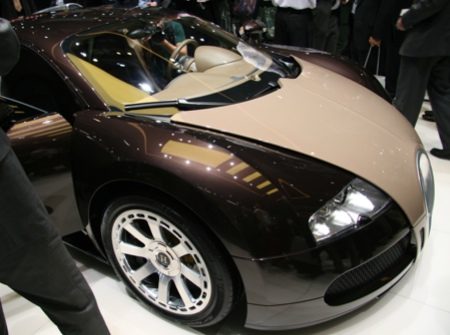 1956 saw the last Molsheim-built Bugatti pass through the factory gates of the famous Alsatian car manufacturer. Fifty years later, in the spring of 2006, the first of the new generation of Molsheim Bugattis, the Bugatti Veyron 16.4, was delivered to its owner.

Ettore Bugatti and Émile Hermès met in the 1920s, when Ettore ordered a bespoke suitcase for his first Bugatti Royale. Almost eighty years later, at the 2006 Pebble Beach Concours d’Élégance, representatives of Bugatti and Hermès met again. And this encounter turned out to be the beginning of a new collaboration between the two houses.

The revival of this relationship may initially appear surprising, as the association between the renowned luxury house and the legendary car manufacturer in today’s automotive context would not immediately spring to mind. It confirms that heritage is able to survive over a time span of several decades.

“Art-Forme-Technique”, the mythical legacy of Bugatti underlines that strong brand values and a total commitment to excellence are as valid today as they were when Ettore Bugatti and Émile Hermès met for the first time. And today’s exchange of expertise, skills and craftsmanship, common to both houses in their respective fields, is still as exciting and rewarding as at the time of Émile and Ettore’s first encounter.

What had begun as a personal friendship has now turned into a modern industrial design project and an important part of Bugatti’s new individual-isation programme. The new Bugatti Veyron Fbg par Hermès is a milestone in Bugatti’s renaissance and an enthusiastic and promising partnership between Hermès and Bugatti – between a “car-loving saddle- maker” and a “horse-loving carmaker”.

The meeting between Émile Hermès and Ettore Bugatti, at the beginning of the 20th century, marked an epoch-making encounter between a prestigious Parisian saddler with a passion for cars, and an exceptional carmaker with a passion for the world of horses. The result was a friendship nourished by shared enthusiasms, respect and admiration, and a common vision of the importance of innovation, creativity and modernity.

The Bugatti Veyron Fbg par Hermès revives the historic links between Bugatti and Hermès, demonstrat¬ing the enduring power of their shared values, in the pursuit of contemporary excellence.

Since its beginnings in 1837, Hermès has always sought to accompany people on the move: on horseback, by car, by plane or most recently by helicopter… Elegance, functionality, creativity and extreme attention to quality are the principles shaping the design and production of everything we make. The Bugatti Veyron was, then, studied, “tamed” and rethought. At the invitation of Hermès Artistic Direction, designer Gabriele Pezzini worked with our craftsmen to create a car that is just as much Hermès as it is Bugatti.

The utmost attention has been paid to the reworking of the interior and exterior alike. A highly detailed approach, reflecting the spirit of excellence underpin¬ning the collaboration between teams from Bugatti and Hermès on this shared project. Handcrafted leatherwork by Hermès is to be found throughout, even under the hood.

This exceptional car has been invested with an aura of serenity and refinement that accompanies it wherever it goes, from country lanes to city streets. In Paris, we shall be delighted to see it glide, astonishingly acquiescent, along the Rue du Faubourg Saint-Honoré.

On the occasion of the 78th Geneva Motor Show (from 6 to 16 March 2008), Bugatti and Hermès co-present the fruit of their partnership: the “Bugatti Veyron Fbg par Hermès”, associat-ing Bugatti’s technical performance with the expertise of Hermès and its craftsmen. In partnership with Hermès, designer Gabriele Pezzini has married the distinctive Hermès style to the legendary Bugatti Veyron 16.4, magnifying the car’s personality.

This remarkable car features an array of excep¬tional characteristics: the innovative alliance of a technologically advanced engine, deliver¬ing 1001 horsepower, with an understated yet uncompromising silhouette reflecting the high performance capacities of state-of-the-art engineering and design, and above all, the pleasure these inspire in every Bugatti owner.

The fascination exerted by this sports coupé, capable of reaching 407 km/h, is due in large part to its unique alliance of the very finest motor-racing technology with comfortable handling for everyday driving. The 16-cylinder “W” configuration engine is fed by four turbochargers and features 64 valves, generating 1001 horse¬power at 6000 rpm. The engine draws on its 8-litre displacement to deliver a maximum torque of 1250 Newton-metres between 2200 and 5500 rpm. With full-time all-wheel drive, the car’s phenomenal power produces breath-takingly dynamic handling, with acceleration from 0 to 100 km/h in a mere 2.5 seconds. The Bugatti Veyron 16.4 benefits from aeronautical and aerospace technologies, making it the fastest production car ever made. The car also features a braking system designed to deliver unprecedented powers of deceleration, establish¬ing a new industry benchmark. The carbon-fibre discs provide brake pressure of up to 180 bars, combined with eight-piston monobloc callipers and titanium pistons fitted with fine steel heads and ceramic heat protectors. Apply the brakes at speeds above 200 km/h, and the rear wing acts as an airbrake, positioning itself at an angle of 113 degrees in less than 0.4 seconds, augmenting the Bugatti Veyron’s already impressive stopping power. The airbrake increases negative lift at the rear of the car to 300 kg, enhancing the braking torque on the rear axle. At 400 km/h, emergency braking will bring the sports car to a complete halt in less than 10 seconds.

This, the world’s most fascinating car, has pushed back the limits of physical engineering to offer a completely new sensation for driver and passenger alike. But it has also adopted a radically different stance to that of other sports cars: its features and finish are sure to impress the most demanding clientele. Hermès and designer Gabriele Pezzini have lavished attention on the interior and exterior of this exceptional car, to create the new Bugatti Veyron 16.4: the “Bugatti Veyron Fbg par Hermès”

A harmonious design, inside and out
The official name of the highly exclusive Bugatti Veyron “Fbg par Hermès” refers to the historic Hermès headquarters on the Rue du Faubourg Saint-Honoré, in the heart of Paris’s eighth arrondissement: the “Fbg” appellation evokes the house’s “faubourg” address.

With the Bugatti Veyron Fbg par Hermès, the exacting standards of Émile Hermès and Ettore Bugatti come together for the first time, in an exceptional collaboration: the culmination of their extreme attention to aesthetic and techno¬logical quality and performance.

Gabriele Pezzini has reinterpreted Bugatti’s tradi¬tional two-tone carriage work, fostering a fluid, harmonious transition between the car’s exterior and interior design. The colour of the hood extends to the interior of the cockpit, and re-emerges behind, at the level of the rear wing.

As a tribute to the celebrated 1924 Bugatti Type 35, undoubtedly the most famous of all time, thanks to its many successes on the racetrack, the new Bugatti Veyron Fbg par Hermès features eight-spoked wheels in polished aluminium, central butterfly wheel locks branded with the letter H, and air vents around the rims repro¬ducing the characteristic appearance of Hermès saddle-stitching. The horseshoe radiator grille, and the lateral ventilation grilles flanking it, are made from lightweight alloys with a design of interlocking H’s evoking the Hermès “signature”.

A refined formal vocabulary
The inner surfaces of the Bugatti Veyron Fbg par Hermès have been designed and sheathed in bull calfskin by the Hermès workshops in Paris. The care and attention to detail observe an extremely refined, minimalist formal vocabulary, reflecting the tradition of the very first Bugattis and the fundamental design principles of the house of Hermès. The door handles echo the fluid forms of handles on Hermès travel bags and luggage. And the dashboard, traditionally finished in brushed aluminium, is here clad entirely in bull calfskin. Passengers aboard the Bugatti Veyron Fbg par Hermès will find a dashboard glove compartment designed to hold a selection of small travel accessories and a zipped Hermès wallet. Both seats are covered in two-toned bull calfskin, and the panel separating the cockpit from the central rear engine – traditionally made of carbon fibre – is covered in the same fine leather. The leather-lined trunk holds a specially-fitted “Toile H” and leather case, hand-made by craftsmen from the Hermès workshops.

This exceptional model – in toning colours of ebony and étoupe, or ebony and brick – is priced at 1.55 million euros (not including tax), available at the end of 2008.