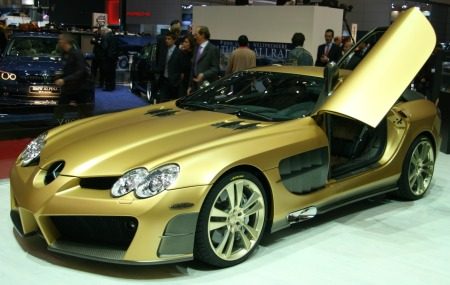 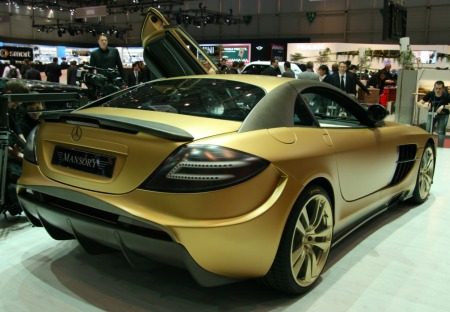 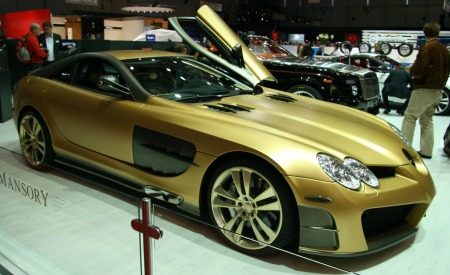 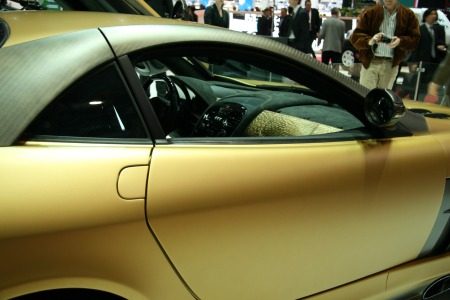 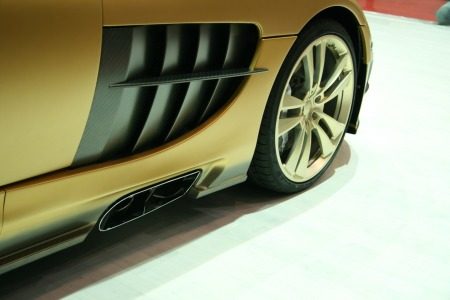 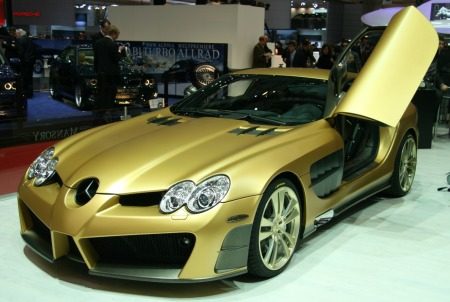 Since 2004 McLaren has been producing the Mercedes Benz SLR McLaren in Woking in almost unaltered form. MANSORY, the specialist in upgrading super sports cars and luxury limousines has now presented the gull wing racer at the Auto Salon 2008 in Geneva in a new design. Not only did the bodywork get a facelift, the engine was also given modified supercharging by means of MANSORY compressor technology. Ultra-light forged wheels and a superlative automotive interior complete the all-round renewal.

Fresh design in tried and tested quality
During the development of the MANSORY Renovatio great value was attached both to individual design as well as aerodynamic efficiency. To save weight MANSORY fashioned its body components out of carbon. The production car body is also made out of this extremely light and resilient material. One component of the body kit is the front apron in dynamic sport design. It channels the airstream perfectly to the custom-designed intercoolers of the performance kit and so ensures an extra helping of cooling air. The new side skirts constitute the optical link between the front and rear wheel arch extensions. These calm the airstream between the axles and create space for the outlets of the MANSORY side pipe exhaust system. The new rear apron with integrated diffuser takes care of additional downforce and puts the final touch to the sporting lines of the styling package.

New components for impressive performance boost
The 5.5 litre V8 engine with its standard 626 hp likewise profited from the comprehensive changes. The motto of the MANSORY engineers when redesigning the engine was “evolution instead of revolution.” The leading idea was not about making major changes to the SLR’s core. Rather, existing components were swapped for modified developments by MANSORY itself. For example, use is made of new high performance compressors and tailor-made intercoolers. The finishing touches to the performance upgrade are a sports air filter and modified engine management. As a result the Renovatio is two tenths faster from zero to 100 km/h than the super sports car production model. The top speed increases to 340 kph. Following the alterations the Renovatio has
700 PS and generates 880 Nm torque on the crankshaft.

Great looks and excellent roadholding
MANSORY provides a special wheel-tyre combination in exclusive design for the requirements of the Renovatio. The one-piece turbine-wheels with five double-spokes, 9 x 20 at the front and 11.5 x 20 at the rear, are impressive thanks both to their sporting looks as well as their outstanding workmanship. The reduction of the unsprung mass due to the especially light forged wheels improves braking distance, acceleration and handling. For maximum wheel grip MANSORY uses 255/30 Dunlop SP Sport Maxx tyres at the front and 325/25 at the rear.

Exclusive interior design without limits
MANSORY has succeeded in creating the perfect symbiosis of sporting functionality and luxurious environment. Only the very best materials have been used in the interior and provide for well-being. The leather processed by master craftsmen is especially hard-wearing and yet extraordinarily soft. This characteristic natural product with its special grain and the perfect craftsmanship of its decorative stitching convey an extravagant flair around the redesigned airbag sports steering wheel. The aluminium pedals, illuminated door tread plates and real carbon applications complete the luxurious overall impression within the Renovatio.