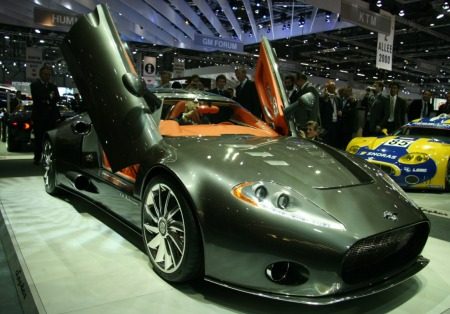 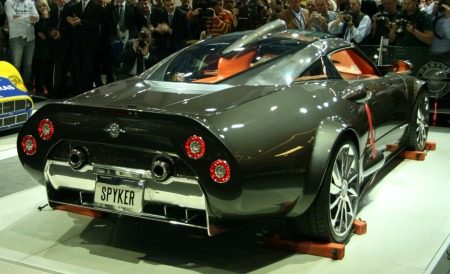 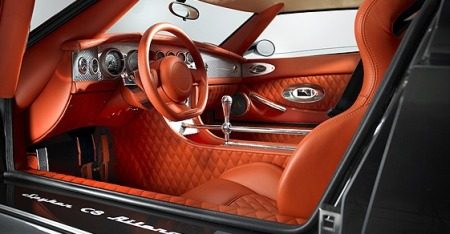 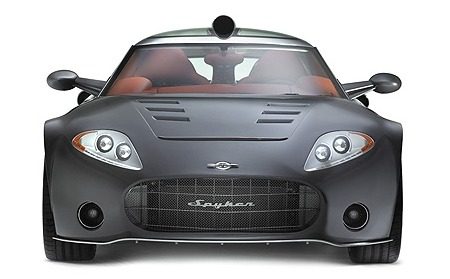 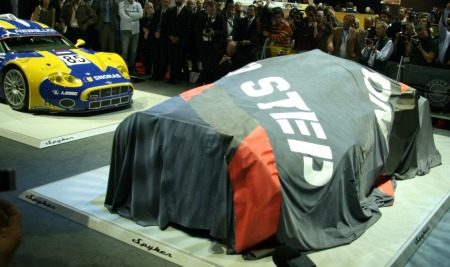 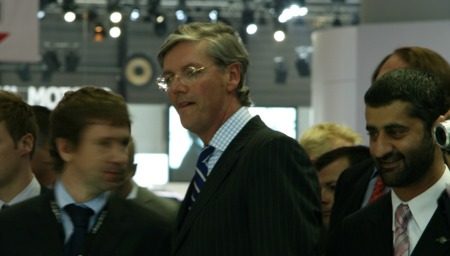 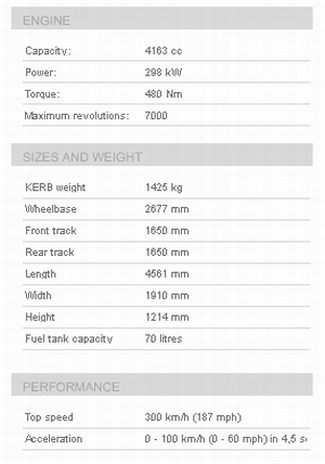 Spyker Cars, manufacturer of premium sport cars, unveiled its second generation C-line sports car at the Salon International de l’Auto in Geneva, Switzerland today: The all aluminium Long Wheel Base model is called Spyker C8 Aileron and will come with both a manual as well as an automatic gearbox.

The C8 Aileron continues Spyker’s signature architecture (applied since its inception in 2000 with the C8 Spyder) of a mid-engined configuration in an aluminium space frame, clad in aluminium body panels.

The Aileron’s space frame is a development of the original space frame of the first generation cars: its torsional rigidity, however, was improved by 40% without adding any weight. Its dimension have changed though, the wheelbase increasing by 10 cm / 4.5 inches for improved road handling and more cockpit space. Also its front track was widened and as a result the car is virtually ‘square’.

Designing a successor of a first generation car is no mean feat. Spyker’s design philosophy has always been to create timeless designs, contemporary but classic.

In the first generation cars the leading design cues were Spyker’s aviation and racing heritage. The propeller design consistently applied to many elements of the cars ( such as the Aeroblade wheels ) since 2000, was up for refreshment though: And in aviation the propeller engine was succeeded by the turbine engine so Spyker adopted the turbine as its “leitmotiv” for the Aileron.

The signature Spyker polished air inlets in aluminium were converted into turbine engine shaped scoops reducing the “bling” element considerably, which reflects a trend Spyker sees in general: more sober designs, less exuberant. The scoops have polished alloy nacelles which may be colour coded with the interior as an option. The airflow around the car was redesigned so that the shark-like gills of the first generation cars (no less than 17 on a C8 Spyder) could be abandoned giving the Aileron a cleaner, smoother appearance.

The radiator opening was enlarged in anticipation of more horsepower requiring additional cooling. The mesh is V-shaped as on the first generation cars, a direct reference to the Spykers of the previous century, but angled forward giving the car a somewhat more aggressive stance.

Also the headlight units were reshaped to follow the body design more closely. LED lights are incorporated in the units for indicators as well as Xenon lights (which are standard now).

The glass jet brighten inspired canopy, first introduced on the C8 Laviolette in February 2001, was extended backwards, reducing drag and increasing cockpit headroom. The signature air inlet atop the cockpit remained save that is now turbine shaped.

With the increased wheelbase (10cm / 4.5 inches) the doors grew by the same length allowing for more comfortable in- and egress.

Unfortunately practicality sometimes gains over design: The first generation cars have split side windows which were not optimal in terms of sealing (wind noise and water management). The Aileron has single pane side glass that drops when the door is opened and closed, creating improved comfort level.

The rear diffuser was redesigned for improved functionality. The redesigned rear lights are LED units.

The outside mirrors were redesigned and the cone is mounted on two turbine fan blades, standard in body colour (but available in polished aluminium as an option)

The Aileron will continue to use the Audi 4.2 litre V8 giving 400 BHP. This state-of-the-art 5 valve 4 cam engine is now mated to a 6 speed Getrag manual or a 6 speed automatic ZF gearbox. This is the first time a Spyker is available with such an automatic gearbox as standard equipment.

The Aeroblade ™ (5 propeller) wheels of the first generation cars are – logically – replaced by a 10 blade rotor wheel called ‘Rotorblade’ ™. They come in 19” all round and are made in left and right hand turning versions.

The Aileron’s suspension was developed from scratch and has double wishbones both front and rear. Shock absorbers are now placed vertically within the wishbones.

Brakes are supplied by AP Racing, a Spyker partner from day one. Colour coded callipers with Spyker script are available as an option. The Aileron is available with carbon ceramic brakes as an option as well.

The interior of all Spykers is clad in the highest quality leather the industry has on offer. The Dutch Tannery of Hulshof provides the six hides used for an Aileron interior in 14 standard colours, which is fitted by Ellemeijer. Any other colour so desired by the customer is available as an option.

Chronoswiss Dials are available as an option as well.

When Spyker started production in 2003 80% of the customers ordered their cars without any audio system, the basic reasoning being that the engine provided all the sound one could possibly wish for. However, with larger numbers of cars going into the market, the demand for a standard sound system increased and cars were fitted with the system chosen by the owner. With the ever increasing success of the I-pod and similar products, the demand for a standard sound system fitted by the factory has increased to the point that every Aileron will be equipped with a Kharma sound system, incorporating a GPS system, Bluetooth, CD player and an I-pod jack. It is paired to 7 Kharma loudspeakers
(see separate chapter press release).

The Aileron is available in 14 standard colours but as an option customers may elect to have the car painted any colour they whish. The Spyker Squadron GT2 colour scheme with big “S”s is available as an option as well.