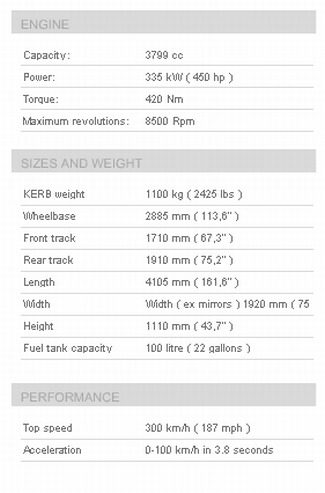 Spyker Squadron – the factory GT2 team -, in partnership with its title sponsor SNORAS Bank and Speedy Racing, is proud to present its latest GT2 racer for the most famous and grueling race on the planet: the 24-Hours of Le Mans. In 2008 and 2009 Spyker Squadron will compete with two Spyker C8 Laviolette GT2Rs in both the Le Mans Series (LMS) and the 24-Hours of Le Mans.

The Laviolette GT2R replaces the successful Spyker C8 Spyder GT2R, the first Spyker that earned podium positions for the Dutch manufacturer of exclusive sports cars in the international GT arena. The new Laviolette has been built from the ground up around on a much stiffer, aluminum spaceframe with better aerodynamic qualities. Based on the team’s knowledge and experience with the previous C8, a long list of components have been changed or improved. The new car is an excellent platform to continuously develop and improve pace to reach the ultimate goal: a podium position at Le Mans.

Both at Le Mans and in the Le Mans Series the team will use Michelin tires.

After two earlier tests in Estoril and Le Castellet (Paul Ricard) the team will head to Barcelona, Spain within three weeks for the first 1000km race this season: the LMS 1000km de Catalunya.