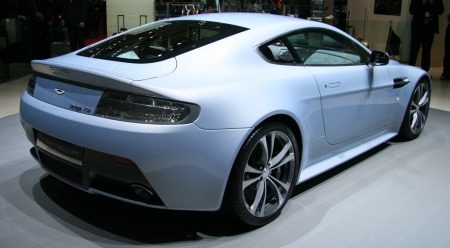 The V12 Vantage RS concept is based on Aston Martin’s critically acclaimed V8 Vantage coupe, but the company’s design and engineering team have fully exploited the design flexibility of their unique VH architecture and the motor sport development of their 6.0 litre V12 engine to create a dramatic and production feasible concept car focussed on extreme performance and dynamics.

In a speech to the assembled guests, Ulrich Bez said: “Over the last five years, we have established a reputation for presenting fully functional, feasible concept cars, and the V12 Vantage RS is no exception. We will listen with interest to feedback on this concept and, as ever, if there is sufficient demand then we will seriously consider a low volume production run in the near future with a price that will reflect the exclusivity of the car.

“With our dedicated production facilities, our own engine plant, our own unique vehicle architecture and now a dedicated design studio, we have the ideal framework to bring new models such as this to market and to further establish Aston Martin as the ultimate independent luxury sports car company.”

Although the 600bhp power output of the V12 Vantage RS concept will be the focus of attention, just as significant is the level of weight reduction achieved by Aston Martin’s engineering team. With a kerb weight of less than 1600kg, the RS concept underlines Aston Martin’s continued commitment to intelligent use of materials and weight reduction as a means of achieving improved efficiency and performance. In common with the recently launched DBS, the bonnet and trunk lid are moulded in carbon fibre and the concept also adopts motor sport-inspired carbon ceramic brake discs.

The subtly aggressive exterior appearance is driven by function. The dramatic bonnet louvres extract air from the fully ducted cooling pack and the trunk lid features a deployable spoiler that rises automatically at high speeds to increase rear down force. The front bumper features cooling ducts for the carbon ceramic brakes and a carbon fibre splitter to balance down force.

Director of Design, Marek Reichman, commented: “Much of Aston Martin’s recent success has come from the ability of our designers and engineers to work hand-in-hand to optimise form and function. Our new dedicated design centre will take this process to a new level and I am delighted that the V12 Vantage RS is the first car to stand on the turntable in the studio.”

The 600bhp 6.0 litre engine featured in the V12 Vantage RS concept has benefited directly from the race development of this acclaimed power unit. It features a dry sump lubrication system, tuned length exhaust manifolds, forged pistons and steel con-rods, revised lift and duration camshafts and modified cylinder heads. Peak power is achieved at 6250rpm and peak torque of 690Nm is at 5000rpm.

The unveiling of the Aston Martin V12 Vantage RS concept concludes a remarkable year of new product announcements for the British manufacturer. In the last twelve months the company has launched two of the most eagerly anticipated sports cars of the year – the DBS and Vantage Roadster – and announced details of the DB9 LM and V8 Vantage N400 special editions which celebrate the company’s racing successes at Le Mans and the Nϋrburgring. All of these models now join the award-winning V8 Vantage, DB9 and DB9 Volante models in production at the company’s Gaydon headquarters.