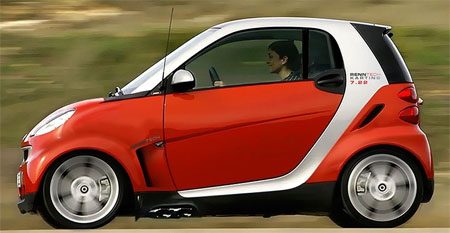 RENNTECH’s 722 tuning package for the Mercedes SLR McLaren supercar has been generating a lot of attention recently, as has RENNTECH’s appointment as the American agent for the Mercedes-Benz McLaren 722GT club racer and SLR.Club Trophy USA series.

Building on these runaway successes, RENNTECH has released details of an exciting new project called the 7.22. Based on the new Smart ForTwo, the 7.22 is powered by two (2) 1000cc, 3 cyl. Smart engines, each mated to its own 5-speed, automated transmission.

“One engine drives the front wheels, the other drives the rears,” explains Hartmut Feyhl, RENNTECH’s president and ex-technical director of AMG North America. “One of my employees, Jo Borras, previously worked with Mosler to build their dual-engined Cadillac TwinStar, and made the magazine rounds a few years later with his own twin-engined Hyundai Tiburon. It seemed like a good idea to try on the Smart, so we went with it.”

Each of the Smart’s drive units exists in its own subframe, complete with its own ECU and electronics, making the process fairly straightforward. Feyhl explained that once the steering mechanism was integrated into the engine’s cradle, the resulting subframe mounted directly to the existing safety cell, using the same mounting points as the original. Feyhl admits “the hardest part was getting the 7.22’s new plastic bodywork ‘right’.”

Interestingly, since each engine and transmission assembly is completely isolated, there is no need to synchronize the two. Feyhl informed us that “each engine and ECU finds its job suddenly easier, and simply acts as if it were going downhill or carrying a lighter load.”

Never ones to leave well enough alone, however, the crew at RENNTECH set to work on their pint-sized terror … but even putting out a string of 750 hp SLR McLarens and 900 lb-ft bi-turbo AMG cars didn’t prepare them for what happeed next.

The boys at RENNTECH were surprised (“shocked” might be a better word) by what happened when the software engineers cracked the Smart’s Bosch electronics and removed the engine’s rev limiters. “It revved like a liter-bike,” says Feyhl, “and none of us expected anything quite like that!”

The end result is a twin-engined, 182 hp AWD street machine that zips from zero to sixty in an astonishing (and terrifying!) 5.1 seconds, on its way to a top speed of 138 mph.

Getting all of the RENNTECH Smart 7.22’s newfound power to the ground are a set of specially-designed 17″ RENNTECH forged Monolite wheels wrapped in Michelin Pilot sport tires. Hard, fade-free stops are made possible by RENNTECH’s 14″ 2-piece rotors and Smart-specific 4 piston calipers, while RENNTECH’s new “Go-eco” exhaust system makes use of futuristic technology to ensure that the 7.22’s only emissions are a blend of pure oxygen and a potpourri of fresh lilacs and honeyuckle.