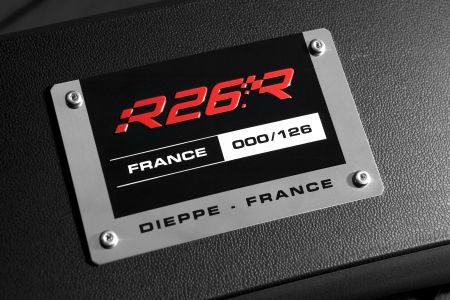 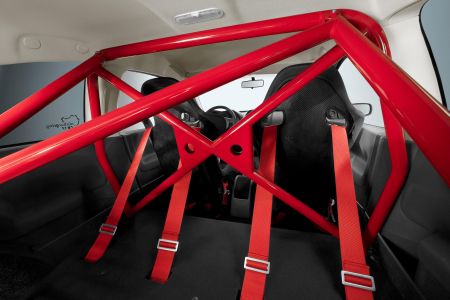 The latest addition to the Renault Sport family is Mégane R26.R, a car that has been engineered for performance and extreme driving enjoyment.
Mégane R26.R is based on Mégane F1 Team R26 and uses the same engine, gearbox and limited slip differential, but has been lightened by 123kg and features specific suspension calibration.
On June 23, 2008, Mégane R26.R established a new lap record for its category round the legendary Nürburgring in Germany with a time of 8m 17s which confirms its extreme performance calling. It is easily recognizable thanks to its carbon bonnet, while its sporty credentials are immediately apparent inside, too, with its Sabelt bucket seats and harness belts.
Mégane R26.R is a limited edition model manufactured at the Alpine Renault factory in Dieppe, France. Total production has been restricted to just 450 cars. Following its unveiling at the London Show, Mégane R26.R is due to go on sale in October 2008.

Mégane R26.R was developed with the intention of:
– offering customers who regularly attend circuit days with a model boasting an unmatched price/performance ratio,
– creating an end of life ‘collectors’ version of Mégane Renault Sport,
– contributing to Renault’s brand image.

Radical looks
Renault Sport Technologies has bestowed Mégane R26.R with several features that give it
unique looks and distinguish it at first glance from other Mégane Renault Sport models.
The varnished carbon bonnet and specific red 18-inch wheels underpin the new car’s
exclusivity, while the exterior styling sports a new spoiler and graphics. The quarterlights and
rear screen are made from extra-tinted polycarbonate. Mégane R26.R can be ordered in a
choice of seven body colours, including three new shades, namely Lune Grey, Nacre White
and Dynamo Blue.
Inside, Mégane R26.R’s cabin carries over the sports calling of its exterior styling, including
the use of leather and suede for the steeringwheel and gearlever bellows.
Mégane R26.R is also equipped with Sabelt bucket seats and harness belts, and is the first
touring car to have aviation-style six-point harness belts as the sole homologated restraint
system. The absence of rear seats serves as a further pointer to the car’s radically sporty
character which is further emphasized by the numbered plaque fixed to the centre console. A
specific numbering system will be employed for each of the countries in which Mégane R26.R
is marketed:
– N°s 1 through to 230 for Great Britain,
– N°s 1 through to 126 for France,
– N°s 1 through to 26 for Switzerland,
– N°s 1 through to 26 for Spain,
– N°s 1 through to 26 for Germany.

Intended just as much to be driven round a closed circuit as it is to be enjoyed on the open
road, Mégane R26.R can be ordered with an optional four-point roll-cage.

Weight saving: a leitmotiv
To guarantee such high performance, Mégane R26.R was put through a weight-saving
programme that saw it shed 123kg compared with the F1 Team R26 version.
To achieve this result, the car goes without a certain number of comfort-related features,
including:
– the rear seats and seatbelts,
– airbags (except driver airbag),
– automatic climate control (available as an option / manual climate control standard),
– rear wiper and wash,
– foglamps,
– headlamp washers,
– the majority of soundproofing material.
Other components that have been modified with a view to reducing weight and optimizing
driving ergonomics are:
– the carbon bonnet (a saving of 7.5kg),
– polycarbonate quarterlights and rear screen (a saving of 5.7kg),
– carbon seat shells and aluminium frame (a saving of 25kg),
– six-point harness belts,
– titanium exhaust line (available as an accessory),
– specific lightweight body equipped with roll-cage mounting brackets.

Uncompromising chassis
As far as the running gear is concerned, the front and rear suspension have evolved to deliver
optimal handling and traction efficiency.
The front layout features the now familiar independent steering axis system, although all the
front suspension components are specific:
– spring ratings have been uprated from 13.4mm to 14mm/100kg,
– damper calibration is specific as a function of the specific specification of the chassis,
– the brake discs are grooved and not cross-drilled,
– optional TOYO PROXES R888 tyres (225/40 R18), or standard Michelin Pilot Sport 2 tyres
(235/40 R18).
– one of the bushes between the lower arm and front subframe has been stiffened.

Regarding the rear suspension, the spring rates have increased from 15.1mm to
16.2mm/100kg, while the damping once again features specific calibration.

For best level traction performance, Mégane R26.R is equipped with a limited slip differential
which has the same transfer rate as that of the F1 Team R26 version (33 per cent).
Driving of a powerful vehicle equipped with a limited slip differential tends to call for certain
driving skills because of the torque steer that can occur in certain situations. The combination
of a limited slip differential and independent steering axis front suspension minimizes this
phenomenon and allows the driver to profit fully from the extra traction and for a more
reassuring drive. The car’s directional precision under cornering is also improved and allows
drivers to re-accelerate both earlier and harder.
Any car boasting such a high level of performance requires a braking system that combines
bite with fade-free durability, and Mégane R26.R’s substantially dimensioned brakes employ
four-piston Brembo callipers and 312mm vented front discs. Unlike the Cup chassis version,
this limited edition model is equipped with grooved discs to ensure even better durability when
the car is pushed.

As much punch as ever
Mégane R26.R is powered by the same 2.0 Turbo engine as Mégane F1 Team R26 which is
mated to a manual six-speed gearbox (ND0*020) with a shorter linkage for even quicker
gearshifts.
This engine boasts peak power of 230hp (169kW) and torque of 310Nm. Indeed, one of this
powerplant’s key features is the availability of the latter across an extremely broad rev range,
with 90 per cent of maximum torque being available between 2,000 and 6,000rpm.
Mégane R26.R accelerates from standstill to 100kph in 6.0 seconds and covers the standing
start kilometre in a mere 25.9s. Its homologated combined cycle fuel consumption is 8.5
litres/100km, equivalent to 199g of CO2/km.

On June 23, 2008, Mégane R26.R established a new lap record for a front-wheel drive car
round the Nürburgring, Germany, with a time of 8m 17s. To recall the new car’s exceptional
performance, a map of the Nordschleife circuit and the time achieved by the Mégane R26.R
are screen-printed on the quarterlights.

The haven of Renault’s sports models
Mégane R26.R is manufactured in the Alpine-Renault factory in Dieppe, France, which
specializes in the production of Renault Sport models. It is produced on the principal
production line, while finishing work and fitment of the shorter gear linkage are carried out in
the competition workshop alongside Mégane Trophy and Clio Cup.

Following its unveiling at the London Show, Mégane R26.R is due to go on sale in October
2008. Only 450 examples of this limited edition model will be produced.