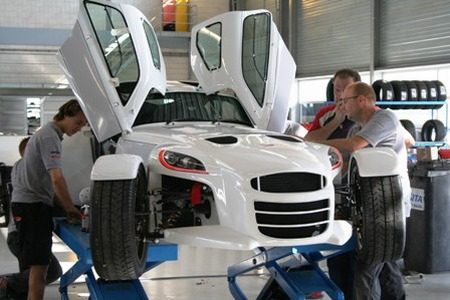 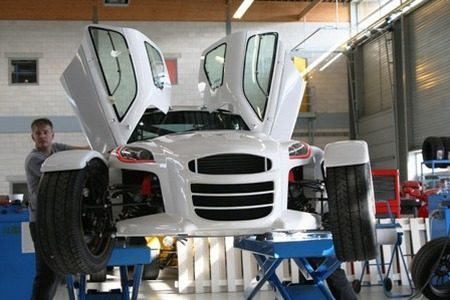 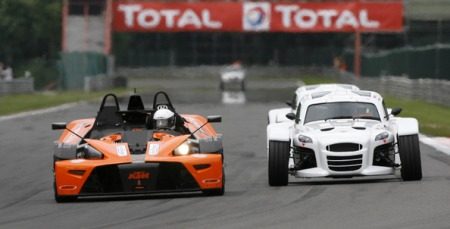 SPA FRANCORCHAMPS, 1st and 2nd of August â€“ After the introduction of the Donkervoort D8 GT at the Geneva Motorshow 2007 and after the invitation by the FIA to participate in the new GT4 Sports Light Race Series, Donkervoort Automobielen B.V. has been working hard on further developing, manufacturing and preparing the GT for the road and the racetrack. This weekend, after 1,5 years, Donkervoort proudly announces the first race kilometres of the D8 GTâ€™s to be covered in the FIA GT4 Sports Light Race Series during the 24H of Spa Francorchamps.

General information
The D8 GT has a chassis/body, which consists of a majority of carbon fibre in combination with aluminium. This has resulted in a particularly light and strong construction that has given the D8 GT the title of the worldâ€™s lightest GT. The total weight of the car is 650 kg and is only 20 kgâ€™s heavier than its open-bodied sister; the Donkervoort D8. Nevertheless, the GT is 30 cm longer, 10 cm wider and 5 cm higher.

Donkervoort has been building closed versions of the D8 on an experimental base in the past, which resulted in a huge gain of experience with regards to aerodynamics and torsional stiffness. The perfect example of this is how Donkervoort pulverised the lap record for legal street cars at the legendary NÃ¼rburgring Nordschleife, beating previous record holder Porsche.

Donkervoort Racing
The Donkervoort D8 GT will cover its first race kilometres in the FIA GT4 Sports Light Race Series prior to the 24H of Spa Francorchamps. This new championship has been introduced by the FIA this year at Silverstone (UK) for road-legal sports cars with a minimum weight of 750 kilograms. It adapts to the current trend in the automotive industry to reduce further CO2 emissions through lowering the weight of cars.

Donkervoort, which celebrates its 30th anniversary this year, has a long and solid reputation in the field of ultra light-weight sports car construction. Donkervoort is entering with 2 pure white GTâ€™s, which will be driven by the French driver StÃ©phane Wintenberger and the Dutch Denis Donkervoort. This season is purposed as a training season, in order to further optimize and develop the D8 GT. The objective for the season of 2009 will be to enter with approximately five cars to compete for the FIA GT4 Sports Light Series championship. For this purpose, Donkervoort has set up a new racing department â€“ Donkervoort Racing. This department not only engages in the development and construction of the cars, but is also active in the field of recruiting and schooling drivers.

Donkervoort Events
Donkervoort Events, which weekly organizes many successful company incentives, is very pleased with this race-expansion. Even more than before, it provides interested companies the opportunity to combine renowned motor sport events with successful business relations-events.

The provisional calendar for 2008 is: