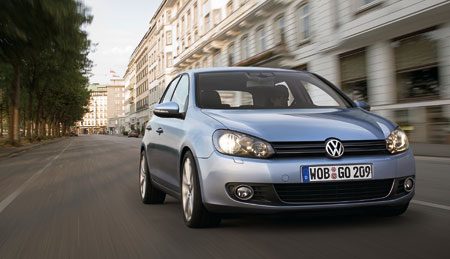 The Best Golf of All Times

* TDI, TSI and DSG systems improve fuel economy by up to 28 percent

Volkswagen is unveiling its most important automotive secret of the year: the new Golf. The car – Europe’s most successful with more than 26 million sold – was improved in all areas. “This sixth generation of Golf cars will completely redefine the quality and comfort level of its class over broad categories, offering more customer value than ever before”, says Prof. Dr. Martin Winterkorn, Chairman of the Board at Volkswagen AG. The European market launch of the new Golf will begin in October; following in succession will be Africa, Asia, Australia and North America. The entry price for the German market is around 16,500 Euros.

The clear and powerful design of the new Golf is showing the entire brand the way to the future. Its acoustic properties and the overall comfort of the Volkswagen tear down class distinctions. Innovative engines and transmission technologies lower fuel consumption by up to 28 percent. All gasoline and diesel engines satisfy limits of the future EU-5 standard.

Assistance systems such as “automatic distance control” (ACC), “adaptive chassis control” (DCC) and the “park steering assistant” bring additional top technologies on board the Golf. A new ESP system, with finer response over its control range, further optimized crash properties, seven airbags including knee airbag, the special head restraints (WOKS) that counteract whiplash trauma, a “seatbelt detection” feature debuting in the rear seating area of the Golf and daytime running lights – that are standard equipment – provide for a maximum level of safety.

The high value of the new Golf is reflected par excellence in its stylish design; all key body elements were redesigned: “We have cast the Golf’s core components in a precise, new mold”, explains Walter de Silva. And the Italian design chief of the German corporation emphasizes this: “The Golf is the global icon car making. So the architecture and graphic form of new model are also absolutely clear and unique.” At the same time, the sixth Golf has a sportier and more distinctive appearance than any previous generation of the model series. De Silva: “It is more accentuated, more three-dimensional than its predecessor; with precisely defined lines and edges, and with finely proportioned flared surfaces and recesses.” And Klaus Bischoff, Chief Designer for the Volkswagen brand, adds: “Every detail is uncompromisingly aimed at improving value.”

Especially in a direct comparison of generations five and six, it becomes clear just how much the new Golf has changed. The team headed up by de Silva and Bischoff sought to crystallize out the “essential DNA” of the model series and send it on a trip to the future. These stylistic characteristics include the clear front end of the first generation and the C-pillar that was perfected in the fourth generation.

The roof section now rests – similar to the new Scirocco – on a dominant filled out shoulder section. Responsible for this is a prominent curving line that – like a muscle trained down to the last fiber – extends from the headlights back to the taillights. In its side profile, this line – which Volkswagen Design calls the “character line” – also gives the new Golf a fuller, lower stance on the road from a side perspective.

All body surfaces are generally more relaxed, more athletic. In front the new car takes up the horizontally aligned radiator grille trim strip between the headlights of the first Golf generation; the grille itself is high-gloss black. The lines of the bumper match those of the radiator grille. Beneath this is an adjacent section with another air scoop. Also arranged on a black background are the chrome light housings of the dynamically styled headlamps.

In the rear too is characterized by a dominance of horizontal lines. The taillights – very wide now – are identified among other things by an unmistakably unique night design. Stylistically – with their crystal-clear lines for the turn signal and backup lamps – they bear a resemblance to the taillights of the Touareg. Overall, the image of the new Golf – in the interplay of all of its design characteristics – is one of a significantly wider, flatter and even more high-end car.

The car’s exceptional value also applies to the newly designed interior, whose refined surfaces and features completely transform class distinctions, both to the touch and visually, especially in the cockpit area. The appearance and layout of materials and details such as brushed chrome accents and round instruments derived directly from those of the Passat CC leave the impression that one is actually sitting in a car of the next higher segment. Ergonomic properties of the car’s interior were also further developed. For example, all operating controls are even easier to use. They include the control of the automatic climate control system (Climatronic) – presented for the first time on the Passat CC – and the power window controls that are now located further forward in the door trim, making them easier to access.

There is a common thread here: Volkswagen’s typical attention to perfection of every detail in the car. Take the example of “seatbelt detection” in the rear: if the Golf is ordered with rear side airbags, the user can recognize on the multifunctional display in the cockpit whether the occupants have their seatbelts fastened in the rear – separately for each seat. Or take the example of leather seats: a new, more robust leather surface is being used. Or the example of the cargo area: four practical hooks ensure that after shopping, the contents of shopping bags are not strewn across the cargo area. Or the example of the outside mirrors: thanks to an aerodynamically optimized shape they get significantly less dirty. They are easier to adjust from the interior, since the power mirror adjustment control is now located further up and more forward in the door trim.

Noise reduction – the quietest Golf since the first model

The new Golf is characterized by first-class acoustic properties. A special damping film in the windshield also reduces driving noises, as does the newly developed seal concept for the doors and side window guides. The new shape of the outside mirrors also significantly reduces wind noise. Furthermore, special modifications were made to acoustically isolate the engine and passenger compartments from one another better. Very quiet rolling tires and new engine bearings round out the noise reduction package.

Making a significant contribution to the pioneering acoustic properties are the exceptionally quiet TDI common rail engines being used in the Golf for the first time. Two balancer shafts also put an end to undesirable vibrations. Plans call for a TDI power range extending from 66 kW / 90 PS to 125 kW / 170 PS. Right at the market launch, Volkswagen will be offering the Golf with two 2.0 liter TDI engines; they output 81 kW / 110 PS and 103 kW / 140 PS. Always there as production equipment: a diesel particulate filter (DPF).

Gasoline engines – more economical than ever before

With the exception of the entry-level versions, all gasoline and diesel engines can be paired with Volkswagen’s dual clutch transmission (DSG). Depending on the engine torque, either a 6-s0eed or 7-speed DSG is used. On the Golf, the extremely efficient and agile DSG has thereby replaced the classic torque converter automatic. Just how efficient the alliance of TSI plus DSG can be is demonstrated by the average fuel consumption of the 1.4 TSI with 160 PS and 7-speed DSG: 6.0 liters (139 g/km CO2). This high-tech duo replaces the 2.0 FSI with 150 PS and 6-speed automatic. Average fuel consumption there: 8.3 liters. Savings: 2.3 liters per hundred kilometers or 28 percent – progress in its best form.