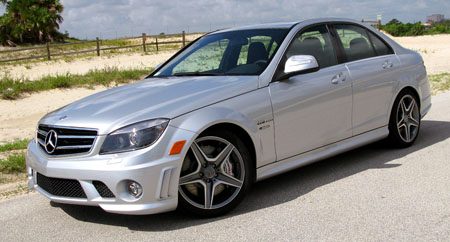 40 years ago, the hottest, fastest sedan you could buy was Mercedes-Benz’ 300SEL 6.3. By placing its largest engine in a mid-sized car, Mercedes’ engineers created a luxurious sedan capable of out-performing some of the quickest sportscars of its day. The 6.3 remains a landmark sports sedan that continues to influence Mercedes’ design direction. Nowhere is the influence of the 6.3 more evident than in AMG’s current line of sports sedans. AMG’s newest cars carry the first purpose-built, “all-AMG” engine design in the company’s history, and the “63” designation they wear (S63, E63, etc.) is a direct reference to the 6.3.

Last year, Mercedes revisited the “bigger engine, smaller car” formula and introduced the C63 AMG. Powered by the same 6.2 liter V8 as its bigger, more expensive S and E class siblings, the C63 promised heart-stopping performance at a bargain price … but, somewhere between concept and production, something happened: the C63 put out a “mere” 451 hp.

While the C63 is certainly no slouch, it didn’t make the same 507 or 518 horsepower that its E and S class siblings made. Some of the power difference can legitimately be blamed on more restrictive intake and exhaust paths – after all, the big V8 is a tight fit in the smaller C class, but this fails to explain how the same engine, when found under the hood of a CLK63 AMG Cabrio, makes 475 hp.

“Mercedes restricted the car,” explains Hartmut Feyhl. “So, our first step in extracting more power from the C63 is to de-restrict the car.” Of course, in this modern age of software encryption and electronic obstacles, that kind of “de-restricting” is easier said than done – which is why Feyhl is exactly the man you want to talk to when it’s time to take your C63 to the next level.

Hartmut Feyhl was technical director at AMG North America before forming his own company, RENNtech, in 1989. Since then, Feyhl built a reputation as one of the world’s premier tuners and America’s foremost authority on Mercedes-Benz high performance.

It should also come as no surprise, then, that RENNtech didn’t leave it at that! “In a sense, the C63 is a return to the roots for Mercedes, and for AMG, and also for RENNtech,” says Feyhl. “It is a very special car, as the C class has grown to about the same size as the 6.3 and the W124 Hammer, but with much more power. We want to see how far we can go with this car.”

With that in mind, RENNtech has introduced a comprehensive line of performance products to turn the AMG C63s of the world into more focused trackday performers, starting with the car you see here.

To get the most from the C63, RENNtech began with the ECU2 high-performance software. Much more than a (relatively) simple de-restriction, this flavor of RENNtech’s software optimizes every aspect of engine performance, building massive amounts of torque across the low-to-mid rpm range and boosting the C63’s top speed to 187 mph. When combined with RENNtech’s stainless-steel long-tube headers and new, track-oriented sound/performance pipes, the RENNtech software produces 548 peak horsepower and 510 lb-ft of torque.

In the past, few would have considered a car like the C63 a truly capable trackday ride, but with the success of track events like the AMG Challenge and SLR.Club Trophy, it is clear that there are a growing AMG drivers who want to experience their car on the track. “We are all racers,” says Feyhl, “and when we find ourselves on a track, we want to be competitive.”

With almost 100 hp over the stock C63, RENNtech-tuned C63s will probably be competitive enough for most people – but keep in mind that this is RENNtech (birthplace of the “real” 722 SLR, where a 900 lb-ft twin-turbo V12 sedan is a daily occurrence) and that 2009 marks RENNtech’s 20th anniversary … does Herr Feyhl have some kind of “birthday party” in mind for RENNtech that involves the C63 and ties all this rich history and tradition together?