Peugeot Sport will profit from the final round of the 2008 Le Mans Series at Silverstone to unveil a 908 HDi FAP equipped with hybrid power featuring a kinetic energy recovery system. The 908 HY will be shown in a new, specific silver-grey livery and will provide a foretaste of what Peugeot’s next endurance racing challenger could resemble, although its use will depend on the regulations that will govern LMP1 cars from 2009.

HY technology enables a proportion of the kinetic energy produced under braking to be either recovered or stored. In the case of a non-hybrid car, this energy is dissipated in the form of heat via the brakes. However, when harnessed, it enables the vehicle’s efficiency to be improved in one of two ways:
– enhanced performance with no increase in the amount of energy consumed thanks to the combination of the stored mechanical energy and the energy produced by the internal combustion engine.
– reduced fuel consumption for the same level of performance thanks to the availability of stored mechanical energy.

The system featured on this demonstrator comprises three key elements:
1) a 60kW gear-driven electric motor-generator which takes the place of the conventional starter motor,
2) batteries which permit recovered energy to be stored in 600 lithium-ion cells divided into 10 battery packs (six in the cockpit instead of the conventional battery and four on the left-hand side of the flat bottom).
3) an electronic power converter (located in the rear part of the front left wing) which controls the flow of energy between the batteries and the motor-generator.

The 908 HY can be powered in one of three ways:
– electric mode only (e.g. in the pit-lane),
– internal combustion engine only,
– a combination of the two.

In the course of a lap of Le Mans, for example, the system will recuperate energy for between 20 and 30 seconds. This energy can be used:

1) either to deliver extra power thanks to an additional boost of 60kW (80hp) for approximately 20 seconds per lap, either automatically when re-accelerating, or when the driver chooses to make use of it (‘push to pass’).

2) or to reduce fuel consumption for the equivalent level of performance
thanks to the mechanical energy recovered (between three and five per
cent).

Michel Barge (Peugeot Sport, Director): “This hybrid 908 HDi FAP is in
perfect keeping with the overall mission of our endurance racing
programme which covers not only the challenge of competing, of course,
but also the fact that as a car manufacturer we can use motor sport as a
research and development tool for the Peugeot brand as a whole. After
innovating through the use of our HDi FAP technology in competition,
running a hybrid car in endurance racing would give Peugeot a chance to
gain extremely valuable experience that would benefit the development of production cars. Whether we use this technology or not in 2009 will
obviously depend on the details of the new regulations published by the
Automobile Club de l’Ouest.” 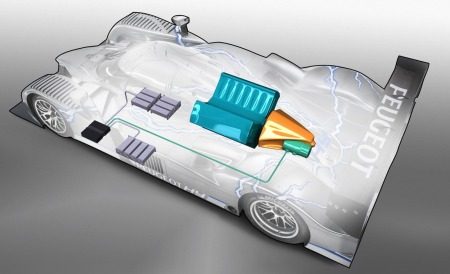