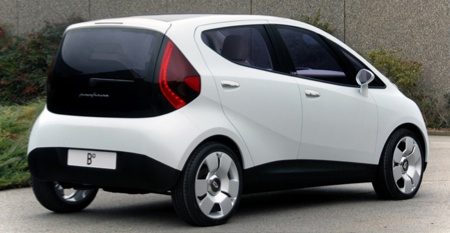 The B0: the solution for a cleaner world

Bolloré and Pininfarina have entered into a partnership featuring all the expertise required to launch serial production of an electric car which, thanks to its technical characteristics and its attractive styling, is bound to make waves in motoring circles.

This car will not be a prototype. It will be a mass production model, with the first units coming off the production line at the end of 2009, after which production will be ramped up gradually based on the availability of the batteries. Built in Turin by Pininfarina-Bolloré, a joint venture formed by the two family-owned groups, the B0 electric car will be powered by Bolloré’s proprietary LMP technology, using a combination of batteries and supercapacitors manufactured in Bolloré’s plants in Quimper, France and Montreal, Canada. The B0 will be a fully-electric vehicle without any carbon dioxide production, having been designed from the ground up with that aim in mind. Its batteries will be housed in a compartment specially designed for that purpose and located under the car, between its axles, lowering its centre of gravity and providing it with outstanding road-holding properties.
With its superb body styled by Pininfarina, Italy’s renowned vehicle design shop, the B0 electric car will be an elegant four-seater, four-door hatchback with an automatic gearbox. Its LMP battery, which will be rechargeable in a matter of hours from a standard domestic main socket, will provide it with a range of 250 km (153 miles). The B0 will have a top speed that is electronically limited to 130 km/h (80 mph) and will feature potent acceleration, reaching 60 km/h from a standing start (0 to 37 mph) in 6.3 seconds. The B0 will also feature solar panels on its roof and hood, so as to help recharge its electrical power reserves.

At the heart of any electric car, lies the battery. Bolloré is a highly diversified group of companies with a combined yearly turnover of 10 billion US dollars and 35,000 employees. For the past 30 years, the group has been the world’s leading producer of components for capacitors. Thanks to its acquired know-how in extruded polymers and the storage of electrical energy, Bolloré has been working for 15 years through its subsidiary, Batscap, to develop a solid-state lithium polymer battery. This battery is able to store, weight-for-weight, and it can be recharged in just a few hours. The battery does not require any maintenance and has a lifespan of around 200,000 km (125,000 miles). Another key benefit is its unmatched safety while in operation. Added to that, the B0 electric car does not emit any exhaust gases, nor any fine particles. The car’s LMP batteries thus help combat air pollution. The batteries of the B0 also contribute to reducing noise, another nuisance which affects people’s quality of life in urban environments.

Supercapacitors are sophisticated energy storage components developed by the Bolloré Group. In an electric car, supercapacitors draw and store energy generated while the car is braking and feed it back into the system when the car moves off again. The result is greater acceleration, increased range and a longer lifespan for the car’s battery. The electric cars powered by BatScap’s LMP batteries and supercapacitors have a range of over 250 km. They are fast (with a top speed of 130 km/h), pleasant to drive, safe, and long-lasting.

Because it is 100% electric powered, the B0 does not generate any pollution. But the process of generating the electricity which the car uses must also, as far as possible, not have produced any atmospheric pollution. That is why the creators of the B0 have designed it to incorporate every possible solution designed to optimise the car’s energy efficiency and use of clean energy sources. For instance, the B0 electric car is fitted with supercapacitors, which enable it to store and recycle the energy that is generated while braking. Similarly, the car’s roof and part of its hood are covered with highperformance solar panels which help power some of its equipment. It goes without saying that a responsible environmental approach must be coherent throughout. Which is why all the materials used to build the car’s body, battery and interior trim have been carefully selected for their low environmental impact. All are recyclable or reusable. The Bolloré Group is also in the process of developing straight-forward panels of photovoltaic cells which might be installed by individuals or in public places to fully or partly recharge the B0 electric car’s batteries using solar energy.