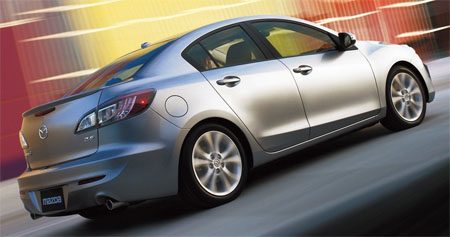 Hiroshima, Japan, 9th October 2008. Mazda Motor Corporation has confirmed that the sedan version of the all-new Mazda3 (known as Mazda Axela in Japan), fully redesigned for the first time in 5 years, will be revealed at the Los Angeles Auto Show on November 19, 2008.

The covers will be pulled off during Mazda’s press conference from 12:20 to 12:45 (local time) revealing the all-new Mazda3, the latest evolution of Mazda’s Zoom-Zoom spirit.

Every element of the all-new Mazda3 has been developed for heightened exhilaration, with a more refined sporty ride, top class fuel economy and quietness. Environmental and safety features, based on Mazda’s long-term “Sustainable Zoom-Zoom” vision, aim to achieve a balance with fun-to-drive. Add in a new expressive face and Mazda’s dynamic design elements, and the all-new Mazda3 is everything a driver could ask for in a sports compact.

The brand new version of Mazda’s best-selling sports compact carries forward the heritage of Mazda and the pedigree of the current Mazda3. Since its launch in 2003, the current Mazda3 has sold approx. 1.8 million vehicles in over 100 countries and has won more than 90 global motoring awards to date. The Mazda3 accounts for almost one in three Mazdas sold every year.

Following the world debut of the North American specification sedan with 2.0- and 2.5-liter engines at the show, the five-door hatchback version will be revealed in line with Mazda’s global sales schedule.