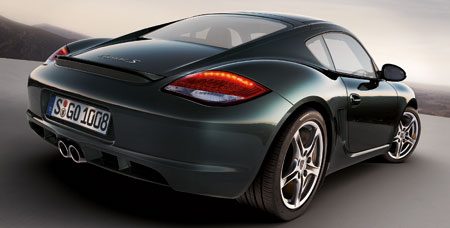 Stuttgart. Dr. Ing. h.c. F. Porsche AG, Stuttgart, is presenting the second generation of the mid-engined Boxster and Cayman sports cars for the first time at the Los Angeles Auto Show. The highlight of the new generation is of course the new flat-six boxer engines developed with new technical features from the ground up, providing not only more power, but also significantly greater fuel efficiency than their predecessors. A further improvement of both fuel economy and performance is guaranteed by the Porsche-Doppelkupplungsgetriebe or PDK for short, the new double-clutch gearbox.

Newly developed Boxer engines with even more power on even less fuel
Displacing 2.9 litres, the “basic“ engine develops 255 bhp (188 kW) in the Boxster and 265 bhp (195 kW) in the Cayman, an increase by 10 and, respectively, 20 horsepower over the preceding models. The 3.4-litre power unit in the S-versions, benefiting from Direct Fuel Injection, now delivers 310 bhp (228 kW) in the Boxster S and 320 bhp (235 kW) in the Cayman S, up by 15 and, respectively, 25 bhp. An outstanding power-to-weight ratio ranging from 4.2 kg (9.3 lb)/bhp on the Cayman S to 5.2 kg (11.5 lb)/bhp on the Boxster offers the driver maximum driving dynamics on minimum fuel. As a result, the Cayman S with PDK and Launch Control featured in the optional Sports Chrono Package accelerates to 100 km/h in 4.9 seconds, setting the benchmark in the range, while the Boxster with its six-speed manual gearbox featured as standard completes the same exercise in 5.9 seconds.

Featuring PDK, both the Boxster and the Cayman for the first time outperform the nine-litre consumption mark: Both models with the new 2.9-litre Boxer engine make do with 8.9 litres/100 kilometres (equal to 26.4 mpg US) according to the EU4 standard – 11 per cent less than the former models with Tiptronic S. Reducing fuel consumption by an even more significant 16 per cent to 9.2 litres/100 kilometres (equal to 25.5 mpg US), the 3.4-litre versions with PDK offer an even greater saving over their predecessors with Tiptronic S.

Roadster and Coupé with even more signs of distinction
The new two-seaters are clearly distinguishable from outside through their newly designed front and rear ends. The new halogen headlights with their integrated direction indicators are reminiscent of the lights on the Carrera GT, the new LED rear lights tapering out to the outside and integrated elegantly in the modified rear end of the car.

From the front the Roadster and Coupé differ clearly from one another through the distinctive design of their air intakes, from the rear through the new rear panels with diffuser inserts on the Boxster and a wind deflector plate on the Cayman.

The rod-shaped positioning lights in LED light conductor technology add a particular touch of class in terms of the cars’ looks, also through their horizontal arrangement in the outer air intakes. Yet a further highlight is provided by the foglamps featured as standard – rectangular in shape on the Boxster, round on the Cayman. For the first time both models are available with a Lights Package featuring bi-xenon headlights, dynamic curve lights and LED daytime driving lights. Replacing the foglamps, these light units are made up on the Boxster of four LEDs positioned next to one another, while on the Cayman four LEDs are arranged in round light units like the eyes of a dice.

PDK: shifting gears even more quickly, reducing fuel consumption by up to 16 per cent
All four sports cars are available for the first time with the Porsche-Doppelkupplungsgetriebe or PDK carried over directly from motorsport and replacing the former Tiptronic S. Equipped with the PDK double-clutch gearbox, the Roadster and Coupé accelerate to 100 km/h or 62 mph 0.1 seconds faster than with the manual six-speed gearbox now also featured on the “basic” models.
Acceleration is particularly fast and dynamic with one of the optional Sports Chrono Packages featuring Launch Control for maximum acceleration from a standing start and the Race Track Gearshift Strategy for the fastest conceivable gearshift as an exclusive highlight on the PDK models. Benefiting from Launch Control, the respective models accelerate from a standstill to 100 km/h or 62 mph yet another 2/10ths of a second faster.

The progress offered by PDK is even more impressive when it comes to fuel economy reduced by up to 16 per cent from the former figure on the first generation: According to the EU4 consumption standard, the Boxster and Cayman equipped with PDK consume just 8.9 litres/100 kilometres, equal to 26.3 mpg US, with the S-models offering almost the same level of economy at just 9.2 litres or 25.5 mpg US.

Dynamic suspension and supreme brakes
The suspension with its new set-up gives the new models a combination of even greater driving dynamics and enhanced comfort all in one. Modification of the valve control map on the steering transmission serves furthermore to reduce steering forces, giving the Boxster and Cayman even more agile and spontaneous steering behaviour.
The wheels come in new design and are half an inch wider on the “basic” models than in the past in order to accommodate the larger brake system of the S-models on the front axle. Both the Boxster and Cayman feature the latest generation of PSM Porsche Stability Management now offering two new functions: Brake Pre-Loading and the Brake Assistant. Whenever the driver lets go of the gas pedal very quickly – which is typical of an upcoming emergency braking manoeuvre – the PSM hydraulic control unit builds up an appropriate level of pressure on the wheel brakes before the driver even presses down the brake pedal, moving the brake pads slightly towards the discs for immediate action. This significantly improves brake response and shortens stopping distances accordingly. When recognising that the driver is braking in an emergency due to very fast operation of the brake pedal and a defined brake force, the PSM hydraulic control unit actively delivers the brake pressure required for maximum stopping power.

New audio and communication systems
Both the Boxster and the Cayman come as standard with the new CDR-30 CD radio boasting an easy-to-read five-inch monochromatic display and the ability to play MP3 CDs. New PCM Porsche Communication Management available as an option complete with hard disc navigation serves as the central control unit for all audio, communication and navigation features.

PCM is now even more versatile, efficient and a lot easier to use than before, standing out in particular through its control monitor enabling the driver to select specific functions simply by tipping the appropriate key and increased in size from 5.8 to 6.5 inches.

As an option PCM is available with highly convenient voice control and, in conjunction with the optional, universal audio interface, can now be used also to control external audio sources such as an iPod® or USB stick.
Last but not least, Porsche’s new two-seaters are available as an option with seat ventilation combined with seat heating on both the standard seats and the comfort seats with full or partial leather.