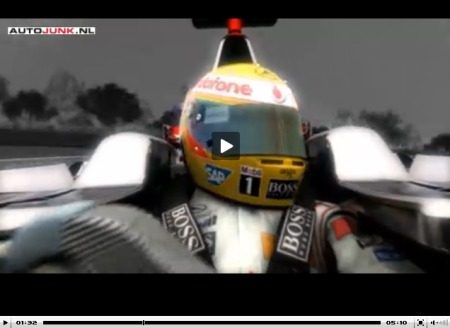 A super-fast corner to begin the lap. Lewis withstands up to 5g for six seconds through this quadruple-apex left-hander, making it the longest and most physical corner on the Grand Prix calendar. The prolonged lateral loads place the engine’s 300 moving parts under enormous stress and make it staggeringly tough on Lewis’s neck muscles. “You have to attack this corner,” says Lewis. “A bump at the first apex destabilises the car and you have to be very careful with how you position it, otherwise you can have a big oversteer moment.”

2. Estoril, Magny Cours (5th gear, 200 kph, 3.5g)
Lewis’s neck gets little respite because Estoril, another long and fast corner, comes next. It’s a double-apex right-hander, through which Lewis has to plant the throttle in fifth gear without being able to see his exit. The track undulates through 180 degrees, leaving him on a high-speed rollercoaster. “Due to the high speeds,” he says, “the car generates a lot of downforce through this corner and it feels planted to the track. It’s great fun, but it’s vital to make a good exit because a long straight follows.”

Lewis will have to wait until 2009 to drive a his Grand Prix race car at Suzuka for the first time, but such is the track’s fearsome reputation that he has included two corners from the former Japanese Grand Prix venue on his Mobil 1 Superlap. 130R is a left-hander, so-called because it has a radius of 130 metres, and it’s taken flat-in-top-gear with the engine screaming at its 19,000rpm limit. Lewis turns in smoothly and lets the car run wide over the smooth exit kerb to ensure that he scrubs off as little speed as possible.

Like 130R, Eau Rouge is a section that’s taken flat-out. The corner is in fact three bends, a left-right-left flick up the side of a hill, and it sees Lewis experience lateral and vertical g-forces. “This is one of the best corners on the calendar,” says Lewis. “It’s not difficult, but you’re just excited all the way through it. As you climb up the side of the hill, there’s a moment when all you can see from the cockpit is the sky. It’s fantastic because you lose your stomach over the crest at the top.” The car loses a bit of speed as it climbs the hill, but the whole section still takes only one second to complete at 305kph.

After a long period on full throttle, Lewis needs to be careful not to out-brake himself on this slippery section of street circuit. Tabac is the slowest corner on the lap, through which the Mobil 1 oil inside Lewis’s Mercedes V8 engine travels faster than the car. “At the Monaco Grand Prix we have maximum downforce,” says Lewis, “so the car feels planted to the ground. But with the barriers so close there is no room for error; you have to be very precise.” Some slippery white lines at the exit can induce oversteer as Lewis tries to get back on the power, making it a great test of driver skill.

The car accelerates quickly along the downhill run towards Suzuka’s Turn 1. Lewis is into seventh gear when he turns into this double-apex right, through which he has to turn, brake and change down three gears before hitting the first apex. Without changing his steering lock, Lewis hustles the car to the second apex, where he gets back on the power and accelerates uphill towards the exit kerb.

The Casino is the most famous landmark in Monaco. The cars pass to the left of its revolving doors as they enter Casino Square, where they are faced with a blind and bumpy right-hander. Lewis slows his car to just over 160kph and positions it in the middle of the track for the entry. “I really enjoy driving through here,” he says, “because one corner leads to another. There is not rest for the driver.” As soon as he hits the apex kerb he’s back on the power, but he needs to be wary of two bumps at the exit, which induce wheelspin and make it difficult to feed in the power of his Mercedes-Benz V8.

It was here, on the final lap of the 2008 Brazilian Grand Prix, that Lewis prepared to pass Timo Glock for fifth place and claim his maiden world title. But that’s not why he’s included it on his Mobil 1 Superlap. “This is a very bumpy left-hander,” says Lewis. “It slopes downhill and you can carry more speed than you initially think is possible because a compression in the middle of the corner helps to turn the car. You’re really on the limit and you need amazing car control to keep a hold of it.” A clean exit is vital because Lewis carries that speed all the way to Copse, the final corner on the lap.

This is one of the fastest Grand Prix corners and it grabs Lewis’s attention in more ways than one. He approaches it in seventh gear and literally throws the car towards the apex barrier. Yes, a barrier separates the pitlane and the track at this point, which makes the 273kp/h corner completely blind. “You can’t touch the brakes,” says Lewis. “You have to turn in with a small lift and just hope you get round.” The direction of the wind influences car performance through here because a head wind generates more aerodynamic downforce than a tail wind. “If the conditions are right,” continues Lewis, “you can take Copse without a lift, but that’s pretty scary.”

Lewis then lets his MP4-23 run onto the flat exit kerb and powers his way across the start-finish line to begin another lap. He’s clearly having the time of his life. 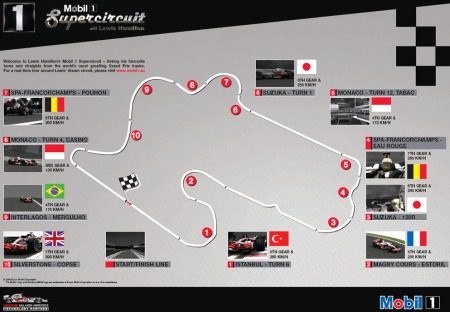