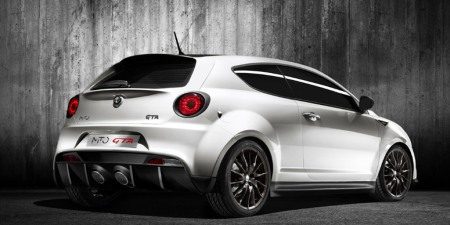 Alfa Romeo returns to the Geneva International Motorshow with a visually impressive stand on which world previews and current production cars alternate to emphasize – yet again – the uniqueness of the brand on the world motoring scene.

The undoubted leading player is the Alfa Romeo MiTo GTA Concept, the expression of a philosophy which has its roots in the glorious world of competition and is projected into the future as the forerunner of a new generation of sporting cars.
Designed using the experience gained with the 8C Competizione and Spider, the new Concept shares with the exclusive “supercar” the philosophy based on achieving the greatest driving pleasure, resulting from exceptional agility produced by a power-to-weight ratio worthy of a racing car allied to the proverbial Alfa Romeo roadholding. The abbreviation GTA is one of those contributing to the sporting history of the automobile, achieving a long series of successes on European race tracks. So, the new Concept produces the same concentration of emotions as the prestigious Italian Gran Turismo cars, with a product concept which fully embraces the principle of “downsizing”, guaranteeing reduced emissions and lower operating costs.

At Geneva the public can admire a MiTo GTA Concept positioned on a dais covered with a special resin which evokes the flavor of the track and competition, the favorite environment for GTA cars of any era. In fact, one of the most important chapters in the glorious sporting history of Alfa Romeo is without doubt that represented by the Giulia Sprint GTA. With this car was born the philosophy of the Gran Turismo Alleggerito (light grand tourer) which allowed a production car to be converted into a victorious competition prototype thanks to the excellent technical qualities appreciated by drivers of all eras. Moreover, the race track has always been a demanding testing ground for the development of Alfa Romeos, right up to the present day.
Designed to welcome and engage the public, the exhibition area allows them to admire the latest motoring innovations and, at the same time, to “live” the emotions associated with the Alfa Romeo name. The innovative stand is born out of a perfect marriage of design and technology, of sportiness and stylistic refinement. In fact, the area is dominated by costly materials – gloss lacquer, leather, steel and the mirrored walls – which reflect the mood of the interiors of the cars on display. And on the floors, which have inlays of various materials with different shades of black and steel inserts, the MiTo, Brera and 159 (sedan and Sportwagon) models stand out while two examples of the 8C Competizione and Spider are positioned on platforms of back-lacquered glass and inserts of a special resin evoking the racing environment. Some of these cars are fitted with two of the latest engines which anticipate the Euro 5 regulations: the 1.75 liter 200 HP Turbo Gasoline Engine and the 2.0 liter JTDM 170 HP Diesel Engine.

The whole exhibition area is made even more evocative by the imposing “Racing Red” wall which is the ideal background to the curvaceous and unique design of the cars, turning them into real stars. And in the fifth visually impressive and illuminated enclosure are accessories and articles from the Alfa Romeo Store. In addition, with the exception of the Alfa Romeo MiTo GTA Concept and the Alfa Romeo 8C Spider, which are in white colors, all the other cars on show are in “Racing Red” and perfectly express the main mission of Alfa Romeo: the production design of cars equipped with advanced mechanics and technology, characterized by contemporary lines and shapes which enhance the characteristics of comfort, sportiness, elegance and power inherent in the Alfa Romeo make.