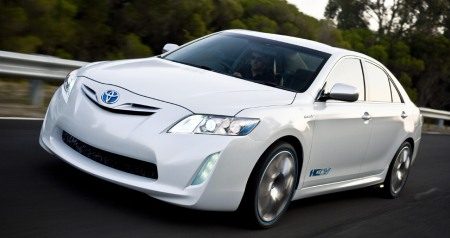 Toyota Australia has celebrated winning the right to manufacture a hybrid car in Australia by producing a stylish concept car.

Developed locally by Toyota Style Australia, the HC-CV (Hybrid Camry Concept Vehicle) had its world premiere ahead of the 2009 Melbourne International Motor Show.

The unveiling of the concept car marks the start of a 12-month countdown to the launch of Australia’s first locally produced hybrid car, based on the best-selling Camry sedan.

“The startling paintwork, dramatic lines and sporty appearance of this concept car convey the excitement and passion in our company to produce Australia’s first hybrid car,” Mr Yasuda said.

“The hybrid Camry – which will share some key design features with the HC-CV – will play a key role in bringing the future to the Australian automotive manufacturing sector.

“It is a future that uses less fuel while delivering better performance.”

“Toyota is already the only local manufacturer producing a four-cylinder car in this country. We have been building Camry in this country – in Melbourne – for nearly 22 years.

“Our locally manufactured hybrid Camry will be launched early next year.”

“HC-CV is our expression of the contemporary hybrid sedan,” he said.

The front of the car is characterised by expressive, sharp lines and taught surfaces. It echoes the latest Toyota Hybrid styling cues, with vertical fog lamps, larger lower opening and a streamlined upper grille.

“The lower grille texture is a random pattern, inspired by forms found in nature, moving away from traditional constructed patterns,” he said.

The “aero” theme continues along the side skirts, which flow into the rear diffuser, giving a sporty, yet lightweight and functional appearance. The rear spoiler enhances the visual appeal.

The headlights are symbolic of Toyota’s hybrid image with a blue hue. They fuse technical elements with natural forms. Some lenses have a waterfall impression, while others are functional, lightweight and technical in appearance. The rear LED lamps, also with a blue hue, provide an unmistakable hybrid look.

Toyota logos on the car are also highlighted by a translucent blue hue. The satin chrome front grille, mirrors and rear boot-lid garnish add to the clean, crisp image.

The wheels are a combination of shear, overlayed surfaces and graphics.

The body colour is unique – a satin white pearl with subtle blue highlights to provide a serene, calm feeling. The paint allows intricate detailing and features to show through.

The interior uses contrasting coloured trim. Highlights of metallic blue have been applied asymmetrically to the seats in a wave-like graphic reminiscent of the Hybrid Synergy Drive logo.

The seat embossing echoes the exterior grille mesh with a tree bark-like pattern. White stitching adds a subtle, yet premium touch. Satin chrome accents tie in with the exterior and add to the tranquil environment.