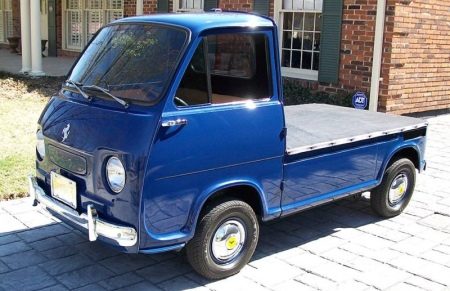 The story begins in 1969, the company was Subaru and the vehicles were considered smaller than a Mini vehicles. These vehicles were called Micro vehicles. The company made these in several different models for all different people. There were trucks, vans and cars. All of these vehicles were powered by the same engine. The engine is of course located in the rear and is air cooled. These engines were know for the fuel economy because of there 2 cylinder 2 stoke design, they were able to accomplish 65 MPG and still reach speeds of 65 MPH. What a vehicle! I am sure if the car makers today could do that, they would be selling a lot more cars and trucks, but as you know, 2 stroke engines would never meet the EPA standards of today.

Let’s get to the good stuff… The truck you see is a complete restoration form the ground up. I can say that with no hesitation, because the entire body was completely disassembled and was chemically stripped. The entire drive train at the time was also gone through, not to mention the entire electrical side of the vehicle. The truck now has custom marker lamps that are smooth as the paint along with the taillights. The headlights also have the custom touch, with the turn signals built into them along with parking lamps. As far as the interior, this is also another big highlight. The entire interior was replaced with the softest leather I have ever felt. The gages are Ferrari and the GPS is from Garmin. There is also a Alpine system that will blow you out of the cab.

The entire truck is nothing but drop jaw beautiful and will make the finest car collector drool. This is the type of vehicle that demands attention were ever it goes. There is not one item that will need attention and can be driven or shown today. I wish you luck if you decide to bid. There will never be another Ferrari Micro truck this nice ever again.