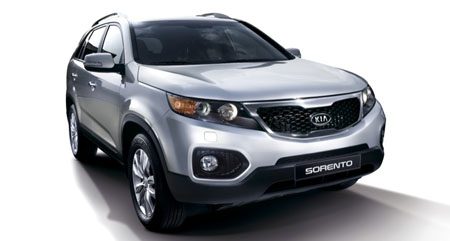 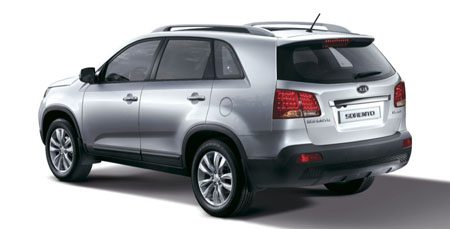 The original Kia Sorento was a ‘landmark’ vehicle which took the Korean brand into a whole new section of the automotive market all around the world. Introduced in 2002, it marked a huge step for Kia, challenging many established brands and starting the process of changing public perception of Kia as a ‘maker of small cars.’

Sorento earned widespread media and public acclaim for its innovative styling, durability, off-road abilities and value-for-money. Over the next seven years, it attracted thousands of customers who had not previously considered buying a Kia, and achieved global sales of almost 900,000 units. It also paved the way for the successful introduction of the smaller Kia Sportage.

At its launch, the original Kia Sorento injected fresh visual excitement into the CUV segment with its ‘stand-out’ looks. Now, under the direction of Kia’s Chief Design Officer (CDO), Peter Schreyer, the Kia design team aimed to deliver futuristic styling with a bold sense of power and dynamism, to once again differentiate Kia’s larger CUV from potential rivals by incorporating Kia’s new design DNA.

“With the new Sorento, we have created an all-new, seven-seater CUV that will soon be recognized as an ‘exciting all-rounder’ with a much broader customer appeal,” commented Hyoung-Keun Lee, Senior Executive Vice President & COO of the International Business Division. “Despite the current economic uncertainties, we are confident that New Sorento will significantly increase Kia’s share of the utility vehicle market, achieving annual global sales of 140,000 units from 2010.”

The new, longer bodyshell created for new Sorento, with its repositioned A-pillars and dashboard (moved forwards) and extended tailgate (moved rearwards), ensures that the cabin is much more spacious than the current model. The real and perceived quality of the cabin is greatly enhanced and available high-tech features will include: keyless entry, engine start button, reversing safety camera, built-in sat-nav and panoramic glass sunroof.

As part of Kia’s drive to expand market coverage with its latest CUV, the new Sorento will eventually be manufactured with a total of five engines – different engines being available in different regions around the world to best suit local requirements – with CO2 emissions from just 173 g/km.

Introducing a bold sense of power and dynamism

Longer and lower, the new Sorento brings sleek styling and a futuristic touch to the world of the urban CUV. With its longer front overhang, wedge profile, crisply defined greenhouse and accentuated wheelarch volumes, Kia’s new CUV looks thoroughly modern and sporty. The 4.7-metre long new Sorento moves vehicle design in this segment up to a new level of sophistication.

Bold frontal styling incorporates Kia’s new ‘signature grille’ that blends seamlessly into the new Sorento’s four-light, black bezel wrap-around headlamps. The profile’s rising upper belt-line and the dynamic bevel treatment beneath the greenhouse (echoing the new Cerato/Forte), plus the unique trapezoid C-Pillar adds tension and endows new Sorento with a unique appearance. Extending the rear window to the outer edges of the simply styled tailgate hints at the spacious cabin and the large tail lamps enhance the sporty appearance.

The new Sorento’s interior styling echoes the sense of power and dynamism created by the exterior appearance. Kia is confident that existing Sorento owners and new customers will be equally impressed by the cabin’s generous proportions, sweeping dashboard design, high-quality fit, discreet trim accents and the availability of numerous high-tech features.

The thick-rimmed three-spoke steering wheel is becoming a Kia trademark feature and through it the driver can view another element of Kia’s developing design DNA – the ‘three-cylinder’ instrument cluster. Similar to the cluster fitted to the 2009 Kia Magentis (Optima), new Kia Soul and new Kia Cerato (Forte), the new Sorento’s cluster has clear and precise graphics.

Depending on model, new Sorento will be equipped with a six, eight or 10-speaker audio system, with MP3 and iPod connectivity, plus built-in or external amplifier and a new sat—nav system with a 6.5-inch screen. Remote controls for the audio system are mounted on the steering wheel.

Versatile seating for seven and more cabin space for all

The longer bodyshell created for new Sorento ensures that the stretched cabin is much more spacious than the current model, with seating for up to seven people. Occupants in all three seat rows benefit from greater legroom, headroom and shoulder room. There is much more space for occupants seated in the third row – headroom is increased by 64 mm (to 906 mm) and legroom by 102 mm (to 795 mm). Luggage space in new Sorento is among the best-in-class as cargo capacity is increased by 15%, thanks to moving the tailgate back by almost 70 mm.

During the design and engineering process to create New Sorento, Kia’s research and development team prioritized achieving a major improvement in the vehicle’s refinement and minimizing its noise, vibration and harshness (NVH). An excellent foundation for creating a vehicle with good NVH qualities is a stiff bodyshell structure and the New Sorento features a much higher percentage (70.4%) of high-tensile strength steel compared to the previous model (40.0%).

Kia’s all-new Sorento will be manufactured with up to four different engines to meet the needs of motorists in every region of the globe. For the Korean market, Kia is offering the new Sorento with three engines, including a version of its 2.7-litre V6 engine running on low-cost LPG (liquefied petroleum gas) called the ‘Mu LPI’. This unit delivers 165 ps and 157 Nm – the reduced outputs a consequence of using LPG which contains 25% less ‘stored energy’. New Sorento will also be available in the Korean market with the four-cylinder 2.4-litre Theta II gasoline engine that delivers 175 ps and 225 Nm, as well as the new four-cylinder R2.2 diesel engine.

The all-new ‘R’ family of turbo-diesel engines proves that Kia’s engineering capabilities are indeed world-class. The R2.2-liter unit comfortably out-performs most four-cylinder and many V6 units from rival brands, while complying with Euro5 emissions standards thanks to its third-generation common-rail fuel system. The R2.2 generates a maximum of 197 ps and 435 Nm.

New six-speed gearboxes, plus choice of 2WD or 4WD systems

Kia’s all-new six-speed automatic transmission is a regular ‘torque converter’ automatic, but it incorporates a unique ‘flat’ torque converter (which allows the unit to be 54 mm shorter), has 62 fewer parts (than a five-speed unit), weighs 12 kilos less and boosts fuel economy by up to 12%.

New Sorento buyers can select from two advanced drivetrains to ‘best-match’ the on-road and off-road abilities of their new Kia vehicle to their lifestyle. The 2WD drivetrain offers lower weight and enhanced fuel economy, while the 4WD drivetrain will be ideal for buyers who regularly face difficult driving conditions, tow trailers (weighing up to 2,500 kilos, depending on model) or go off-road.

For new Sorento the suspension engineer’s brief was to shift the handling bias a little to improve the on-road driving experience, in terms of ride quality and steering ‘feel’ – while retaining the vast majority of the previous model’s off-road abilities. The suspension has been lowered by 10 mm and thanks to the new unitary (monocoque) bodyshell construction the centre of gravity has been lowered by 54 mm.

The MacPherson strut front and multi-link rear suspension is ‘carried over’ from the previous model, but with significant improvements. The steering is now more direct (6% faster), requiring fewer turns of the wheel lock-to-lock.

For maximum stopping power, all new Sorento models are equipped with an all-disc braking system. Either as standard or an option, ABS anti-lock and EBD brake force distribution systems are available.

New Sorento presents buyers with a range of state-of-the-art safety systems and equipment as standard or as options – depending on market. Active safety technologies that buyers can specify include ESC, HAC, DBC, TPMS (Tire Pressure Monitoring System) and RPAS (Rear Parking Assist System), plus several systems to boost braking performance during extreme conditions.

Reversing is made even safer by a new Kia Reversing Safety Camera mounted on the tailgate. This camera is fitted with a 130 degree wide-angle lens and transmits images to a 3.5-inch LCD display panel set within the cabin’s rear view mirror whenever reverse gear is selected.

New Sorento’s robust all-new bodyshell structure delivers increased impact resistance. Using a much higher percentage (70.4%) of high-tensile strength steel the new vehicle achieves excellent rigidity and strength. Particular attention was paid to the B-pillar areas, with a roll-over hoop incorporated into the B-pillars and much stronger (60 kg grade) steel is used in the side sills.

The new Sorento bodyshell is designed to achieve the top-score 5-Star rating in Europe’s EuroNCAP and the USA’s current official NHTSA crash tests, plus a ‘Good’ rating (again the top-score) in IIHS tests for both frontal and side impacts.

Body & Chassis
Five-door, five-seater CUV, with new all-steel unitary construction bodyshell. Depending on market, choice of five transversely-mounted gasoline and diesel engines, driving the front or front & rear wheels via a five- or six-speed manual or five- or six-speed automatic transmission with Sport Mode (depending on model).

Engines (availability will vary by region and individual markets)

Transmissions
Choice of five-speed and six-speed manual and automatic transmissions (depending on model and market).