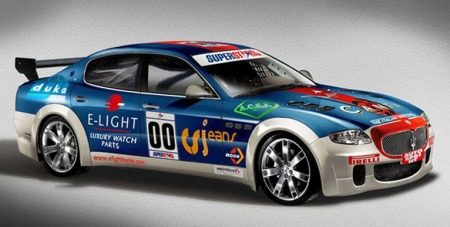 A prestige new entry joins the list of Superstars Series 2009 championship contestants. It is the Swiss Team, ready to bring to its outright debut the Maserati Quattroporte, entrusting it to a very skilful driver, with a noteworthy past in F1 and in Sport and GT categories, whose name is Andrea Chiesa who, except for a few fleeting appearances, for the fist time in his career will be at the wheel of a Touring car.

A challenge entirely original for the team set up at the end of 2008 but with a twenty-year background in car competitions, which aims to line up also a second car already during this season (the other driver will be designed in a short time), fielding men of proven experience. Among them the chief mechanic, Giovanni Albertin, rally cars fitter since the first half of the seventies, thence involved with several key roles in Ferrari Challenge and in GT Series both in Italy and abroad.

That of the Trident is also a new brand in the championship for V8 Touring cars only and for this reason the Swiss Team commitment constitutes for sure, to all intents and purposes, a reason of special interest in the context of a varied and fierce competition.

“Ours is a triennial program, mainly supported by E-Light sponsor – explained Giovanni Albertin. The choice to take part in Superstars Series championship originates also from the fact that in this category the public is directly involved, because it is induced to identify its own every day car with those on track. The idea, after first races, is to line up a second car too. We favoured the Quattroporte pushed by Maserati blazon, also if we will have to work at once on weight distribution and reduction. Sadev is developing expressly for us a sequential gearbox and we expect to carry out first tests at the beginning of April.”

Andrea Chiesa, born in 1964, competed in three F.1 Grand Prix with Fondmetal-Ford in 1992, but claims also a glorious past in F.3 (in which he distinguished himself in 1987 becoming Italian vice-champion) and in F. 3000 in which raced for three years winning the Mediterranean Grand Prix on Pergusa track in 1989. After leaving single-seater, more recently he was crowned N-GT Italian champion in 2004-2005 biennium and took also part in several editions of Le Mans 24 Hours. Superstars has grown year by year thus becoming, in my view, a valid alternative to GT – stated the experienced driver – both for a factor related to more affordable costs and for the appeal resulting from the presence of many models in addition to an attractive international openness and media coverage. For 2009 I can only say that, with the exception of the circuits, we will have to discover time by time almost everything. I haven’t seen the car yet and both I and the team will be able to have an idea of the available car potential only when we will bring it on track. The objective is to reach a good level of competitiveness and reliability which for sure are not missing to the others, being present in the championship since long time. The occurrence of driving again a rear drive car encourages myself because I’m convinced that the kind of driving won’t be so different from that of GTs I had in my hands in the last years, besides of course the dimensions, the weight and the aerodynamic load. Further on, speaking about the team, I already knew the people working on this project and their soundness. All this will allow me to face my coming commitment with more tranquillity.

The Maserati Quattroporte in a rear drive car with a front V8, 4.200 cc engine able to develop about 450 HP in its racing version. The weight, without the handicap due the use of a sequential gearbox (a Sadev placed in the car rear) is 1.430 kg. Tyres are Pirelli, according to regulations, while the bodywork, for an explicit choice, mirrors almost totally that of the road version with a few small aerodynamic changes. At Swiss Team home are already working at full tilt on first Maserati Quattroporte assembly. The rendezvous is in a little more than one month, when the team will carry out the first test sessions in view of Imola first round on April 19.