The M TwinPower Turbo: Twin Scroll Twin Turbo Technology with the joint exhaust manifold on both rows of cylinders making its debut.
With the model portfolio being enlarged through the addition of two all-wheel-drive BMW M Cars, the engine range is likewise being enhanced through spectacular new technology: Both the BMW X5 M and the BMW X6 M come with a truly outstanding power unit ranking right at the top in the current engine range of BMW M GmbH in terms of both output and torque.

In this case the power and dynamism so typical of BMW M is provided by a new and truly unique construction principle, the new M TwinPower Turbo with Twin Scroll Twin Turbo Technology and a common exhaust manifold for both rows of cylinders ensuring extremely spontaneous and direct behaviour, linear build-up of power and an unusually consistent torque curve.

With its displacement of 4,395 cc, the new M TwinPower Turbo delivers its exceptional power through particularly sophisticated turbocharger technology. Indeed, the V8 power unit with Twin Scroll Twin Turbo Technology and an exhaust manifold spanning both rows of cylinders represents the absolute state of the art in turbocharging. No other turbocharged engine offers a comparable combination of spontaneous torque and pulling power, a steadily rising power curve typical of BMW M, and maximum efficiency all in one.

Further outstanding features to be admired on the new M TwinPower Turbo are the special BMW M pistons and camshafts as well as the cooling system almost completely new from the ground up. To optimise the cooling circuit in accordance with the exceptionally high output per litre of the engine, the technology already featured on the V8 power unit in the BMW X6 xDrive50i and the new BMW 750i has been significantly modified and upgraded to an even higher standard. Dropping the water reservoir in the V-section between the two rows of cylinders, for example, the responsible engineers have succeeded in reducing not only the amount of coolant, but also the weight of the system.

Together with other features, a second low-temperature radiator with an additional electrical coolant pump improves the intercooling function on the new M TwinPower Turbo. This optimises the performance of indirect intercooling in particularly dynamic driving cycles. And last but not least, an additional electrical coolant pump with an after-running function serves to cool the bearing mounts on the turbochargers after switching off the engine.

Turbochargers and catalytic converters in the V-section between the two rows of cylinders.
The highly innovative turbocharging system results from both the arrangement of the turbochargers and the supply of air. Together with the catalytic converters, the two turbochargers are positioned in the V-section between the two rows of cylinders at a 90° angle. This special position already to be seen on the eight-cylinder power units featured in the BMW X6 xDrive50i and the new BMW 750i allows unusually compact dimensions and arrangement. At the same time it requires intake and outlet ducts in a new position, reducing the length of the pipes and allowing larger cross-sections significantly minimising pressure losses on the exhaust side.

A further advantage of this arrangement is the shorter distance between the combustion chambers and the primary exhaust gas management systems. As a result, the catalytic converters reach their optimum operating temperature even more quickly after starting the engine.

Perfect guidance of gas flow: the dual-cylinder exhaust gas manifold.
Patented by BMW, the common flow of exhaust gas for both rows of cylinders ensures optimum gas throughput under all conditions. BMW’s new M TwinPower Turbo is indeed the first power unit in the world to feature such an unprecedented exhaust manifold.

This particular configuration is made possible by arranging the exhaust gas turbochargers and the catalytic converters in the V-section between the two rows of cylinders. The unique principle of the dual-row exhaust gas manifold thus provides the basis for the exceptionally spontaneous and direct response of the M TwinPower Turbo.

The system features no less than four completely separated exhaust gas pipes to provide this new technology. Two pipes on each side flow into each of the two Twin Scroll Turbochargers, merging together shortly before they reach the turbine. This provides a consistent and intense supply of exhaust gas ensuring a spontaneous and direct response and maintaining consistently high turbocharger pressure.

Functioning independently of the respective row of cylinders, the four exhaust gas ducts are allocated to those two combustion chambers which have a firing interval of 360° ideal for a V8 power unit in the efficient use of exhaust energy. This provides a steady and constant rhythm of gas flow in each of the two exhaust ducts, an effect further enhanced by the identical length of each duct on the exhaust gas manifolds linked to one another. The result is a consistent level of pressure acting on the two turbochargers, without any kind of counter-flow or adverse pressure.

The Twin Scroll Turbochargers specially developed for the new M turbo engine excel through their particularly high level of compressor and turbine efficiency, with the system operating at maximum charge pressure of 1.5 bar.

The Twin Scroll Twin Turbo power unit with its dual-cylinder exhaust gas manifold uses the potential of turbocharger technology in a unique manner. The extremely spontaneous and direct response of the system and the unusually high level of torque and pulling power extending all the way up from low engine speeds and constantly maintained up to a high load level are the characteristic features of the new M TwinPower Turbo. This truly impressive development of power is accompanied by fascinating engine sound highlighting the free-revving characteristics and the linear build-up of power through that typical, thoroughbred sound effect so characteristic of a BMW M Car.

Standing out clearly from the conventional sound of a V8 with its low frequencies, the M TwinPower Turbo develops a completely different and absolutely unique sound pattern with its sporting characteristics borne out in particular by the dual-cylinder exhaust gas manifold.

The introduction of map-controlled exhaust gas flaps in the exhaust system furthermore offers the option to clearly distinguish also in acoustic terms between the various settings in the Power Mode – the Sports and Efficiency driving programs, each standing out through their very distinctive engine sound.

The twin-chamber exhaust system on the new M TwinPower Turbo is characterised largely by straight pipes and a large cross-section. The two exhaust pipes merge into a common silencer at the rear leading on to the two dual tailpipes so typical of BMW M with their chrome trim right at the end.

Acceleration in the BMW X5 M and the BMW X6 M is ultra-powerful and dynamic right from the start, with huge thrust from the ground up. Both models reach 100 km/h from a standstill in just 4.7 seconds, continuing to accelerate at a fascinating pace all the way to top speed.

Top speed of both models is limited electronically to 250 km/h or 155 mph. As an option, however, this self-imposed speed limit may be raised to 275 km/h or 171 mph in conjunction with the optional M Driver’s Package. This also includes BMW Driver Training on a race track giving the discerning motorist the final qualifications for such outstanding performance.

Supreme efficiency in the segment thanks to High Precision Injection and BMW EfficientDynamics.
The new M TwinPower Turbo develops its outstanding performance not only through supreme power and muscle, but also with a degree of efficiency unparalleled in this segment.

This superiority is attributable largely to the fuel supply system, High Precision Injection with piezo-injectors positioned between the valves ensuring a particularly precise supply of fuel.

High Precision Injection uses injectors positioned directly next to the spark plugs in the cylinder head and supplying fuel to the combustion chambers at a pressure of 200 bar. The cooling effect provided through the direct injection of fuel allows a higher compression ratio than on a turbocharged engine with conventional manifold injection. This increases the efficiency of the engine accordingly, providing more power on less fuel.

Another important factor contributing to such greater fuel economy is double-VANOS infinite camshaft adjustment typical of BMW power units. An important advantage of double-VANOS is that it helps to develop high torque at low engine speeds for powerful acceleration from the ground up.

Efficiency is enhanced to an even higher level by the volume flow-controlled oil pump, with the oil level being measured by sensors showing the data recorded whenever required in the instrument cluster. 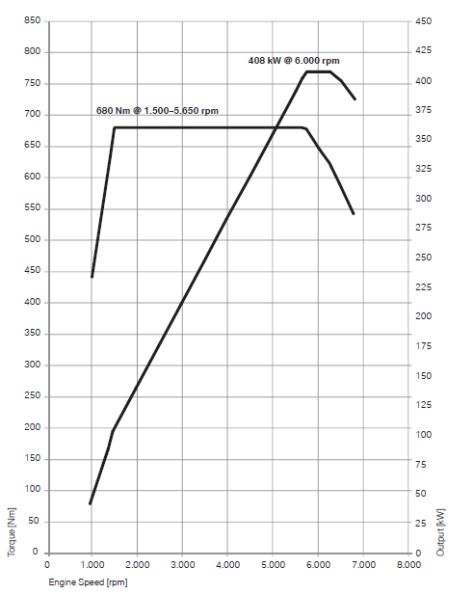