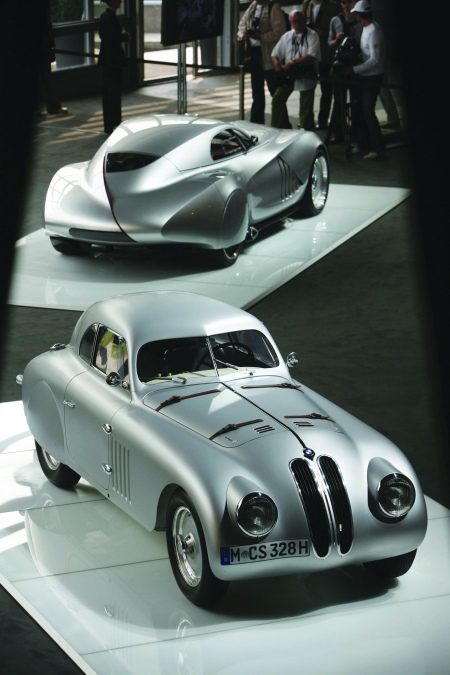 BMW and the Mille Miglia are united by a shared history that goes back a long way. The triumphs of the BMW 328 are as inseparably linked with this 1,000-mile race as the winning appearance of the BMW 507 in the late 1950s. 2009 sees BMW Classic writing a further chapter of this historic narrative. An icon of BMW racing history, normally only on view at the BMW Museum, has been rendered raceworthy again especially for this year’s Mille Miglia: the BMW 328 Mille Miglia Touring Coupé, overall winner of the 1940 event. “On the one hand we want to express the high regard in which we hold the Mille Miglia,” says Karl Baumer, head of BMW Classic, “and on the other our aim is to show that the BMW Museum is no dead-end street, but that we also put historic vehicles back on the road for special occasions.” Visitors to the Museum need not miss out on the legendary racing coupé: during its absence a faithfully reproduced replica will be standing in for the original.
As well as the Touring Coupé, several BMW 328 production models will be sent out onto the roads between Rome and Brescia, along with a range of BMW 328 Mille Miglia Roadsters and a BMW 328 Berlin-Rome Roadster. The youngest BMW to make the journey from Munich to Italy will be a BMW 507 built in 1957. In all, nine works cars will be lining up at the start of this year’s Mille Miglia, with seven further teams bearing the blue and white logo also expected in Brescia.

In the hope of competing in the Berlin-Rome race scheduled for 1941, Germany’s National Sports Authority had three existing BMW Roadsters fitted with more advanced aerodynamic roadster bodies by Carrozzeria Touring of Milan. What ultimately emerged were racing cars that boasted an outstandingly good drag coefficient for the time. The events of the Second World War, however, put paid to any further motor racing events with German involvement.

BMW 328.
The 328 Roadster, developed in 1935/36, is one of the legends of automobile history. Although only modest facilities were available, the result was a sports car of most attractive appearance that soon dominated the two-litre class. Modified competition versions won their classes at Le Mans and in the Mille Miglia. Of the 464 cars that were built, 403 had the standard roadster body, the remaining chassis being used for racing versions or special bodywork
ordered by customers.

BMW 328 Touring Coupé.
The company Touring in Milan built a particularly light-weight “superleggera” coupé body on the BMW 328 chassis for use in fast long-distance races. The improved aerodynamics were intended to achieve much higher speeds. The car was first used in June 1939 in the 24-hour race at Le Mans. Max Prinz zu Schaumburg-Lippe and Hans Wencher won the 2-litre sports-car class in a new record time and came 5th in the overall placings. In April 1940, the car driven by Fritz Huschke von Hanstein and Walter Bäumer won a commanding overall victory in the Mille Miglia. Successes and the overall concept make this vehicle a unique racing legend.

BMW 328 Mille Miglia Roadster.
For lack of time, two of the three BMW 328 Roadster models scheduled to compete in the 1st Gran Premio Brescia delle Mille Miglia of 1940 had their bodywork built not in Munich, but by coachbuilders Touring of Milan on the basis of BMW designs. Like the BMW 328 Coupé, this aerodynamically advanced, ultra-lightweight body consisted of a tubular space frame with an aluminium skin. The team behind the wheel of this car comprised Willy Briem and Uli Richter, who propelled it to an outstanding fifth place overall in the 1940 Mille Miglia and thus played a key role in securing the team prize for BMW.

BMW 507.
The BMW 507 roadster was launched at the 1955 Frankfurt Motor Show. BMW had succeeded in creating one of the most beautiful sports cars of all time. The car was based on the technology of the 3.2 litre 502 saloon but with the power output increased to 150 bhp. The 507 was built to a design created by Albrecht Graf Goertz, a colleague of Raymond Loewy. This sports car, available with three different rear-axle transmission ratios and a range of top speeds between 190 and 220 km/h, worked wonders for the image of Bayerische Motoren Werke. Almost all BMW 507s, in many cases bought originally by international celebrities, are still on the road today. Two of them have special bodies.