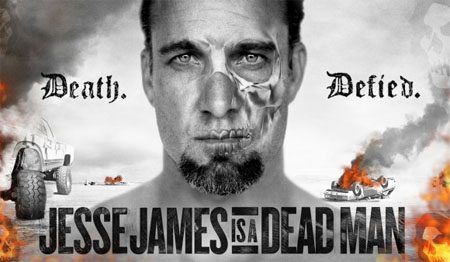 Jesse’s time was documented by the Southern California Timing Association and beat the previous record holder, the BMW H2R, which previously held the land-speed record for an H2 car of 185mph in Germany. The vehicle used by Jesse was an emission free vehicle with a “Breathable Exhaust.”

Jesse went to El Mirage Dry Lake Bed with an extreme purpose: to break the land speed record of 185 MPH for a hydrogen-fueled vehicle. It’s a record that has long been on his mind and it has not been an easy road getting here. Jesse has consulted the help of legendary land speed racer

Mike Cook. Mike gave Jesse invaluable advice on the design of the car. He also helped Jesse pick up the nuance of driving the car and was with him in the testing phase. Engine wizard Kurt Urban came from Detroit and auto row to help him develop a superior hydrogen engine: an internal combustion throwback to the days of overpowering American steel. Together they created an emission free vehicle that will dispel any notions of the power of alternative fuels. Jesse prepared for a worst case scenario situation by escaping from a burning fuselage, narrowly avoiding injury and testing his mettle to the limit.

Jesse James is a custom bike and car builder, producer, publisher, television host and restaurateur. In 2000, James started his TV career with Discovery Channel’s “Motorcycle Mania,” and in 2002 produced and starred in the international television hit, “Monster Garage.” Before his TV gigs, James started.

West Coast Choppers by doing what he loved, building motorcycles in his mom’s garage. As an expert welder, James produces only 12-14 bikes a year, making a very long wait list for his coveted custom machines.

More recently, James established his own production company, Payupsucker Productions, and in 2004, he became publisher of Garage Magazine and launched Payupsucker Publications. In 2006 he opened an eco-friendly burger joint, Cisco Burger, in Long Beach, CA.

BASE Productions, Inc. is an eight-time Emmy Award and ten-time IDEA Award-winning production company that is breaking new ground for cutting-edge reality, documentary and unscripted infotainment programming. BASE Productions’ use of cutting-edge motion-capture and CGI technology is unmatched and brings a signature look to all of their productions. BASE Productions is based in Los Angeles and Washington, D.C. The company was founded by John Brenkus and Mickey Stern.