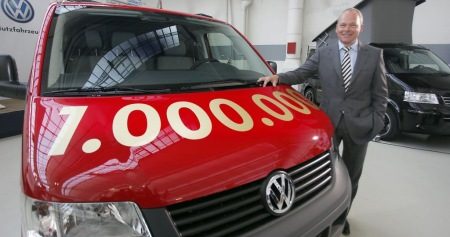 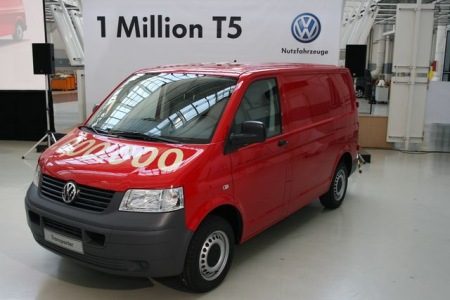 Hanover, 30th June 2009 – Volkswagen Commercial Vehicles produced the one millionth vehicle of the T5 series today at the Hanover plant. The vehicle is a Transporter Van 1.9-litre TDI 62 kW in Tornado Red.

‘The T5 is and remains the number one in its segment for new registrations in Europe and Germany,’ commented Stephan Schaller, CEO of Volkswagen Commercial Vehicles during the celebrations at the Hanover plant. ‘One million T5s – that means one million customers towards whom we have a particular responsibility. This number is, furthermore, the product of all employees at Volkswagen Commercial Vehicles: in Production, but also in Development and Procurement, in Quality Assurance, in Sales and everywhere in the brand and in our dealerships,’ said Schaller.

Heinrich Söfjer, chairman of the Volkswagen Commercial Vehicles works council, also focused on the particular commitment of the employees: ‘The colleagues have once again been successful with the T5 in building a vehicle where quality is assured! On the one hand this increases the image of reliability for our T5 with the customers and on the other hand we have been able to further our market leadership both in good times and bad. With this anniversary, the T5 has made its contribution towards making Hanover the location for light goods and leisure vehicles yesterday, today and tomorrow.’

Last year alone Volkswagen Commercial Vehicles delivered approximately 178,000 T5s to customers. Alongside Germany, the most important markets in Europe include Great Britain, The Netherlands and Austria.

The success story of the current series began with the start of production on 3rd March 2003. Volkswagen Commercial Vehicles builds the T5 in the plants at Hanover and Poznań. The closed vehicle versions are built in Hanover and the open construction versions, dropside and double cabin, are built in Poznań. The T5 series is made up of the Transporter, Caravelle, Multivan and California models. Each individual model is made up of a scope of individual model variants. Numerous awards and first prizes from national and international motoring magazines demonstrate the popularity of the T5 from the beginning. Every year the T5 collects prizes in its segment: ‘Van of the Year’, ‘Transporter of the Year’ (2003), ‘International Van of the Year’ (2004), ‘Car of the Year’ (auto motor und sport 2004 – 2009), ‘Four-wheel vehicle of the Year’ (Auto Bild Allrad 2005 – 2009), ‘Touring vehicle of the Year’ (promobil, 2009) and finally ‘Classic vehicle of the future’ (Motor Klassik, 2007).

The T5 is also the first choice for trade, service providers, workmen, local and regional authorities, ministries and private customers for innumerable transport and mobility requirements. Whether it be a van, dropside, double cab, Kombi or Caravelle, Multivan and California – every customer requirement is fulfilled. The T5 is delivered with a long and short wheelbase and with right or left-hand drive. If one includes all of the individual engines, a total of 460 basic variants of the T5 are produced as standard in Hanover alone. The production line builds a model with a short wheelbase followed by one with a long wheelbase, a van is followed by a Kombi with one or two side windows. ‘This indicates that we can listen to the requirements of the customer, our motto being: build a vehicle to suit a need,’ says Schaller.

The T5 is in full swing. One million vehicles produced is the incentive to beat the approximately 1.7 million predecessor model T4s that were built in Hanover.

In order to underline the particular relationship of the production location to the Hanover region, Volkswagen Commercial Vehicles will, upon the occasion of this production jubilee, donate a T5 Caravelle to a family selected by the ‘A heart for children’ campaign.

The foundation stone for the second Volkswagen plant after Wolfsburg was laid on 8th March 1955 – one year later the first Transporters left the production line in Hannover-Stöcken. With its more than five decades of history, the location has the longest tradition of any Transporter plant in the world. All five generations of the Volkswagen bus were produced here – a total of more than 7.5 million vehicles. Worldwide more than 10 million Volkswagen vans have been produced since 1950 – in Wolfsburg, Hanover, Poznań, Brazil, Mexico and South Africa. The home plant of Hanover was completely restructured for the start of production of the T5 on 3rd March 2003. With approximately 12,000 employees, the plant is the largest industrial employer in the Hanover region. Volkswagen Commercial Vehicles produces not only the successful brand models here, but also cylinder heads and heat exchangers for the Volkswagen Group and, since March 2009, the finished body of the Porsche Panamera.