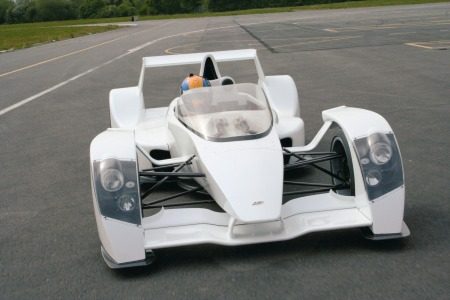 Caparo Vehicle Technologies – a new and advanced automotive engineering consultancy formed a year ago by the rapidly expanding Caparo Group to provide carmakers globally with a centre of excellence in lightweight vehicle design – is putting the finishing touches to the first car it has ever produced.

The Caparo T1 is a high performance two-seater sports car with highly resolved aerodynamics, which has been designed with the looks and performance close to that of a Formula One race car. With series production about to commence, the car will be built for discerning customers seeking the ultimate track day experience in a road driveable vehicle. The Caparo T1 also serves as a technology flagship for demonstrating the company’s high level vehicle design and engineering capabilities.

“We said a year ago, at the outset of this programme, that the only way to truly convince carmakers that we have the experience and skills to design a safe, reliable, cost-efficient and high-performance car is to actually design and build one,” says Ben Scott-Geddes, the car’s co-designer and operations director at Caparo Vehicle Technologies. “We’ve now done so … we’re proud of what we’ve achieved … and we now have something real and tangible to discuss.”

Releasing full details of the car’s specification during the final stages of prototype testing and development, the company has revealed that while customer cars are being readied for start of production, preparations are also well in hand for the T1’s first public appearance as a running car and star attraction at the Goodwood Festival of Speed on 22-24 June 2007 – which effectively becomes the vehicle’s launch date.

With distributors appointed in the UK, USA, South Africa and Dubai and more dealers under evaluation the company has a fast-filling order book. The handover of the car to the first customer is scheduled for July.

The biggest attraction for customers and the most striking aspect of the car’s specification is its headline figure of 1,045bhp-per-tonne power-to-weight ratio. The Caparo T1 is the first series production car ever to break through the 1,000bhp-per-tonne barrier. This has been achieved by installing a home-grown 3.5-litre Caparo V8 engine, which produces 575bhp (425kW) at 10,500rpm and 420Nm (310lbft) at 9,000rpm, into an extremely lightweight body and chassis constructed of advanced composite materials and weighing just 550kg.

The Caparo T1 is around one-third the mass of the average family saloon. Its carbon/aluminium honeycomb monocoque features a separate composite crash structure at the front, while the rear sub-frame specifies aerospace grade steel. The non carbon-fibre steel suspension illustrates the company’s ability to specify structural materials that can deliver the maximum performance at the lowest possible cost.

This means the Caparo T1 is lighter and faster even than a race-winning Le Mans sportscar. In terms of power-to-weight ratio its closest rival would be the latest super-bikes, which are now capable of delivering 175bhp into 185kg thereby just falling short of the magic 1,000bhp-per-tonne figure. Apart from these two wheelers and Formula One cars, no other road or track car comes anywhere close to the Caparo T1’s power-to-weight ratio and highly efficient aerodynamic properties.

This supreme power-to-weight ratio results in a 0-60mph time of less than 2.5 seconds and the ability to reach 100mph within five seconds. Braking performance is no less impressive with 100mph to standstill being delivered in 3.5 seconds.

“We’re absolutely delighted with the progress we’ve made throughout the test and development programme,” says engineering director and T1 co-designer Graham Halstead. “The aerodynamic efficiency was already well established through wind tunnel testing of a scale model even before we built the first prototype. With tens of thousands of miles of durability trials and specific testing now under our belts we have progressively fine tuned the specification of the vehicle to meet and exceed even our high performance objectives.”

“The combination of highly resolved aerodynamics and chassis make the vehicle predictably safe and responsive to driver inputs,” adds Scott-Geddes. “The car drives and handles extremely well both on the road and track and this was the number one consideration in such an uncompromised high performance vehicle.”

“The Caparo T1 not only looks and performs like a Formula One car but it also helps us to demonstrate new and advanced technology to vehicle manufacturers in the aerospace, automotive, defence, marine and motorsport industries,” says Richard Butler director Caparo Vehicle Technologies and chief executive of Caparo Vehicle Products. “Already, we’re working on a number of highly confidential client projects, applying the same approach to aerodynamics, choice of materials and efficient vehicle design, which has allowed us to develop the T1.”

“Ultimately, our goal is to help carmakers to create a new generation of more fuel-efficient and lightweight family cars with significantly lower CO 2 emissions more in keeping with the needs of the 21 st century,” says Angad Paul chief executive of the $1.2bn turnover Caparo Group, a fast-growing automotive Tier 1 supplier, which created Caparo Vehicle Technologies to back the T1 project. “We will help carmakers achieve their objectives by continuing to invest in advanced technology in order to develop new lightweight materials and commercialise their manufacturing processes so they are affordable for mass production.”

“Given the car’s performance potential – the engine has already been successfully bench tested to 700bhp on methanol – we are now looking into the possibility of introducing for our customers an international T1 race series,” says commercial director Sean Butcher. “Our objective is to give customers an affordable and reliable season on the track without incurring the extraordinary costs of running a real Formula One car.”

In terms of colour and trim each of these highly exclusive hand-built cars, which has a starting price of £190,000 (excluding taxes), will be tailored to suit individual customer requirements.