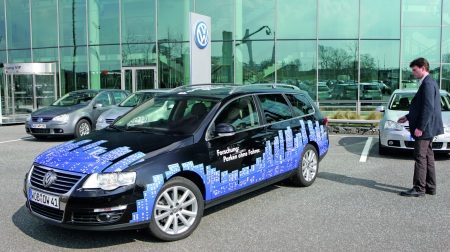 Wolfsburg, 21 April 2008 – There is something decidedly fantastical about this scene: We observe the approach of a Passat estate, it stops, the driver gets out, slams the door shut and, as he walks away from the car, he aims a remote control back at it. That car now proceeds to reverse park itself into the available space, it then independently cuts the engine and activates the door locks. End of performance. In reality, there is nothing at all fantastical about this demonstration. The live performance by Volkswagen can be viewed at this year’s Hanover Fair (21 to 25 April), where the carmaker is premiering its “Park Assist Vision”, a system with the ability to guide a Passat prototype with absolute precision into a perpendicular parking space, i.e. the kind available on parking lots and in underground car parks. These parking spaces are often too narrow to allow drivers and passengers to get in and out of the car comfortably. In the not too distant future, “Park Assist Vision” will put an end to that.

Having already launched a semi-automatic park-steering system, the “Park Assist”, in its Touran, Tiguan, Passat and Passat estate to help drivers parallel park, Volkswagen is now presenting a concept system at the Hanover Fair which is capable of perpendicular parking – and of doing so fully automatically. The only thing the driver needs to do is select an available space on the monitor of the navigation system, set the selection lever of the automatic-drive vehicle (DSG) to “P” and alight from the car. The driver can, of course, choose to stay in the vehicle until the vehicle has been manoeuvred into its space.

Two cameras located in the left and right exterior mirrors are responsible for gauging the dimensions of the parking space. The video signals are transmitted to a 2-GHz high-performance computer which then analyses them and sends commands to the steering and drive systems. If the driver has himself initiated the parking manoeuvre, the “Park Assist Vision” will reverse the vehicle into the parking space in accordance with the previously computed course and using electromechanical power steering, the electronic parking brake, DSG and the engine power produced by the idling mixture. Two additional cameras at the front and rear of the vehicle as well as the system’s ultrasound sensors monitor the operation and will stop the vehicle if necessary. The driver may also interrupt the manoeuvre at any time using the remote control.

This new driver assistance system is still in the trial phase of development, and a date has not yet been set for introduction of the system to series production.