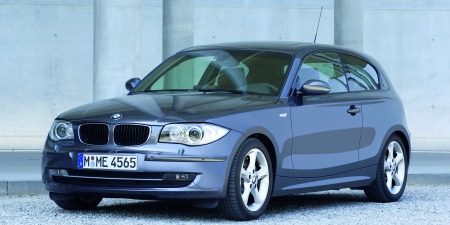 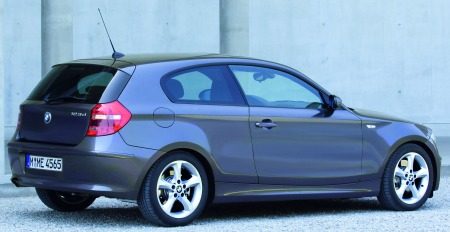 Munich. Curtain up for another cutting edge BMW diesel engine: The BMW 1 Series now features the third version of a new generation of four-cylinder diesel engines currently celebrating its world premiere. The new power unit lies under the bonnet of the BMW 123d and boasts fascinating sporting power and fuel economy unrivalled in its performance class. The new 2-litre four-cylinder engine delivers an output of 150 kW/204 bhp and a maximum torque of 400 Nm, allowing the 3-door model version of the BMW 123d to accelerate from 0 to 62 mph in just 6.9 seconds (5-door version: 7 seconds). Average fuel consumption based on an EU test cycle is 5.2 litres/100 km for both versions, and the CO2 emission level is 138 grams/ km, making the BMW 123d the first production vehicle with a maximum output higher than 200 bhp and conventional drive technology to achieve a CO2 level below 140 grams/km.
BMW’s outstanding competence in the development of diesel engines provides the basis for a unique balance between dynamics and fuel economy. The new four-cylinder diesel engine has an all-aluminium crankcase, Variable Twin Turbo (VTT) and third-generation Common Rail Injection featuring piezo injectors that feed fuel into the combustions chambers at a pressure of 2000 bar. In addition, efficiency-enhancing measures applied to the engine’s periphery such as brake energy regeneration and an Auto Start Stop function have further optimised fuel consumption and emission levels. Thanks to this concentration of innovative technology, the BMW 123d has taken the lead in its competitive segment not only in terms of driving dynamics but also fuel economy.

Pure unadulterated EfficientDynamics: best results in performance and fuel economy.
The most powerful version of the new generation of BMW four-cylinder diesels is an outstanding engine indeed. As the world’s first all-aluminium diesel engine it develops a specific power output of more than 100 bhp. Along with this and an average fuel consumption of 5.2 litres/100 km, the BMW 123d is the particularly fascinating embodiment of the goals the BMW EfficientDynamics development strategy aims to achieve. It offers more driving pleasure than any other diesel model found in this segment. At the same time it provides fuel economy seldom offered even by significantly less powerful vehicles. The BMW 123d – like all other BMW diesel models – is equipped as standard with a diesel particulate filter located in the vicinity of the engine.

The first four-cylinder diesel engine with Variable Twin Turbo.
The experience of driving a new BMW 123d is distinctively characterised by the engine’s spontaneous response and awesome development of power. Maximum torque of the 1995 cc four-cylinder engine is 400 Nm and is already available at an engine speed of 2 000 rpm, maximum output being achieved at 4 400 rpm. The tremendous pulling force unique in this engine segment is achieved with the help of a two-stage turbocharger. This system, which was developed by BMW and termed as Variable Twin Turbo (VTT), was first featured by the most powerful straight six diesel of the BMW 5 Series. In the meantime this 210 kW/286 bhp power unit has been successfully introduced for several series. Variable Twin Turbo is now being employed for the first time in conjunction with a four-cylinder diesel engine.

The Variable Twin Turbo system comprises a small and a large exhaust turbocharger. Due to its lower torque of inertia the smaller turbocharger already takes effect at engine speeds only slightly above idling levels, the larger turbocharger producing an additional performance-boosting effect as soon as higher engine speeds are reached. Thanks to this configuration, there is no so-called turbo lag. A significant increase in power is felt as soon as the foot touches the accelerator. A turbine control valve variably distributes the flow of exhaust to each turbocharger. Specially designed and highly effective engine electronics ensure precise management of the transfer and interaction between both turbochargers. They coordinate the entire system comprising turbines, turbine control valve, bypass and wastegate according to the engine’s operational status.

Low weight, efficient combustion, optimised emission behaviour.
The BMW 123d is the third and most powerful diesel model of the BMW 1 Series. Like the power units featured by the BMW 120d and the BMW 118d, its engine is one of a new generation of four-cylinder diesel power units. Compared with the diesel engines of the previous generation the weight of the three new engines has been reduced by up to 17 kilograms. This has a positive effect both on fuel economy and the vehicle’s agility. Due to the low weight of the engines the new diesel models of the BMW 1 Series are provided with a particularly well-balanced axle load distribution.

The weight reduction is mainly due to the use of a new aluminium crankcase with thermally welded grey cast iron bushings. The significantly lighter aluminium case replaces the grey cast iron block previously employed. The cylinder head including the inlet ports has also been entirely reconstructed, The new design optimises both carburetion and emission levels.
Fuel supply to all of the new four-cylinder diesel engines is effected by a third-generation Common Rail injection system. The BMW 123d features piezo injectors that inject diesel fuel into the combustion chambers via a common pipeline and under extremely high pressure. For the first time a pressure of 2000 bar has been achieved, thereby ensuring particularly accurate fuel dosage and combustion. Due to the fact the fuel is injected in up to three stages per combustion cycle, the flame is distributed relatively evenly, a process that has above all a beneficiary effect on the diesel engine’s running smoothness.

Even greater efficiency with brake energy regeneration and Auto Start Stop function.
When designing the new four-cylinder engines engineers gave consideration to a number of features crucial to maximum efficiency. The redesigned combustion chambers as well as the optimisation of carburetion, combustion and air flow contribute towards a reduction in fuel consumption and emission levels. Moreover, ancillary components such as coolant pump, generator and air-conditioning compressor are located on the intake side of all of the new four-cylinder diesel engines. As all ancillary components are now driven by one single belt, a second belt system is no longer required. This again boosts efficiency as it eliminates frictional losses.

In addition to this, the new BMW 123d features measures within the engine’s periphery to reduce fuel consumption and emission levels. Likewise, these are the result of the long-term development strategy known as BMW EfficientDynamics. The BMW 123d also features intelligent generator management for brake energy regeneration, an Auto Start Stop function, a gear shift indicator and electric steering.

The brake energy regeneration system ensures that the battery, after reaching a minimum charge condition, is basically only charged during braking or overrun phases, the electric current being cut during acceleration. This means that higher engine output becomes available for BMW-characteristic driving pleasure, whilst both fuel consumption and CO2 emission levels are reduced simultaneously. The idea of intelligent energy management can be compared with the operation of reservoir power stations. There, low priced energy is stored overnight in higher reservoirs and recalled during the day to cope with peak loads. Translated into brake energy regeneration featured by the new BMW 123d, this principle facilitates energy-effective economic driving phases to be identified in order to buffer electricity in the battery and to feed it to the on-board electrical system when required.

The BMW 123d with manual transmission features an Auto Start Stop function that provides greater efficiency particularly in city traffic. This system automatically switches off the engine when it is not required. As a result, when stopping at a traffic light for example, fuel consumption drops to zero at that particular moment in time. When the driver switches to neutral and takes his or her foot off the clutch, the engine electronic system silently switches off the engine. When the driver depresses the clutch pedal again, the engine restarts. By maintaining charging pressure the engine restarts in no time at all and without the driver having to do a thing.

In addition to this, a gear shift indicator offers ideal preconditions for best possible fuel management. The engine electronics calculate according to the driving situation the most favourable time to change into the next highest gear in order to achieve the most economical fuel consumption. The driver is informed of the ideal gear change time via an arrow which lights up on the instrument panel and indicates the best gear to select.

Ancillary components function economically and according to requirement:
Additional fuel economising measures are effected automatically. For instance, the BMW 123d is equipped with an active control system for the air vents located in the radiator grille. When the engine does not need to be cooled, the vents are closed, resulting in a measurable enhancement of aerodynamics and a further reduction in fuel consumption. Moreover, a number of ancillary components function according to requirement and therefore effectuate better fuel economy. The Electric Power Steering EPS only uses energy when the steering actually requires assistance or if the driver desires. Consequently, no energy is wasted when driving straight ahead or when constantly driving round bends without additional steering movement.

In addition, the new electrically operated coolant pump is not dependent on engine speed, but temperature-dependent, taking effect only when needed. This is a further contribution towards increased engine efficiency. With a power consumption of around 200 watts it uses only approximately one tenth of the drive energy required by conventional pumps. Furthermore, the belt drive of the air-conditioning compressor is equipped with a clutch. If the air-conditioning is switched off, the compressor is automatically deactivated, thereby facilitating a reduction of the drag torque of the compressor to a minimum.

The BMW 123d: benchmark of driving dynamics and efficiency.
The numerous innovations in the field of drive technology incorporated in the BMW 123d document BMW’s outstanding competence in the development of diesel engines. A comparison of performance and fuel consumption data shows just how far the ideal balance between driving pleasure and efficiency can be taken. Therefore, with its outstanding performance in both disciplines the BMW 123d is an impressive example of the success of BMW EfficientDynamics. Being constantly true to the principle of increasing both driving dynamics and fuel economy with each new model, BMW produces vehicles that are modern in every respect. They do justice to the highest demands on the vehicle and at the same time convince through exemplary fuel economy and emission behaviour.

With an acceleration from 0-62 mph in 6.9 seconds (5-door version 7 seconds) and a top speed of 147 mph (5-door version 147 mph), the BMW 123d has taken the lead over its competitors. The fact that the BMW 1 Series is also the only model in its class to transfer drive power to the road via the rear wheels only strengthens its unique position even further. Never were the qualities of modern diesel engines more evident in a compact car than in the new BMW 123d.

In addition to the impressive high-torque performance, these qualities also include, of course, the potential of diesel technology in terms of economy – a potential that BMW’s engine designers have made use of just as comprehensively as they have given consideration to the sporting talents of this type of engine. The result is an average fuel consumption of 5.2 litres/100 km for the BMW 123d, based on the EU test cycle. Just how much this figure underlines the progress made in engine development becomes evident when comparing with previous generations of engines. Their most economical version endowed the BMW 1 Series with an average fuel consumption of 5.6 litres. In comparison, the new BMW 123d achieves an 8% reduction in fuel consumption, although with an increased power output of no less than 60 kW.

This impressive fuel economy is coupled with exemplary emission behaviour. With a CO2 level of 138 grams/km the new BMW 123d seamlessly takes its place alongside the range of models in the BMW 1 Series that boast particularly low emissions. It is surpassed only by the BMW 120d, which has a CO2 level of128 grams/km, and by the BMW 118d with 119 grams/km.