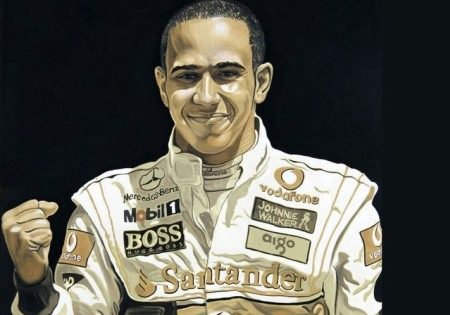 Reigning 2008 FIA Formula One World Drivers’ Champion, Lewis Hamilton, became one of the most pictured British sportsmen in the world when he became the youngest driver to win the title.

But none of the portraits of the 24-year old links him so completely to his sport as this stunning portrait in oil, commissioned to kick off National Oil Check Week….Because the twist is that the oil used is Mobil 1 race oil taken directly from the Vodafone McLaren Mercedes car in which Lewis won last year’s British Grand Prix at Silverstone.

Mobil 1, technology partner to Hamilton’s Vodafone McLaren Mercedes team, charged US artist David Macaluso with the creation of the picture of Lewis in typically triumphant pose to celebrate his title success and highlight Mobil’s role in the UK-wide car maintenance initiative (www.CheckYourOil.co.uk), which kicks off next Monday, June 15.

A limited run of 50 prints of the painting has also been made and one of these special pieces of memorabilia can be won in a competition at www.mobil-1.co.uk in the run-up to the British GP.

The painting will have its first public outing at the ExxonMobil VIP customer event, on the eve of Hamilton’s home Grand Prix at Silverstone.

2008 FIA Formula One World Drivers’ Champion Lewis Hamilton comments: “I’m very impressed with the oil painting. I’ve always known that the Mobil 1 in my race car is an important component that can give us an edge over our rivals in some circumstances, but I’d never have guessed you could use it to paint with; the oil gives this picture a unique look and feel…”

Macaluso, an expert in the use of motor oil as a painting medium, said: “I’ve been recycling used motor oil into paintings since 2005, so it was exciting to do a portrait of Lewis, and it was a privilege. When people look at my portrait of Lewis Hamilton, I want them to know it contains the Mobil 1 that circulated inside his Mercedes-Benz engine. History was made by Hamilton with this oil, and to experience this painting is to be eye-to-eye with that history.
“Painting with the Mobil 1 used motor oil offered a wide range of tones and was obviously a very refined product from its texture. It was extremely smooth and very particle-rich, with all the engine dirt in perpetual suspension, making for a great painting medium.”

Mobil 1 UK marketing manager, Gary Plumridge, said: “Lewis’s World Championship win last season was the fifth Formula 1 drivers’ title Mobil has won but it was perhaps the most satisfying because of the thrilling manner in which the title was decided.

“We wanted to create something that celebrates Lewis’s spectacular triumph but also highlights the vital role that Mobil 1 plays in the performance and protection of any engine.”

National Oil Check Week (www.CheckYourOil.co.uk) was set up by Comma Oil, owned by ExxonMobil, to encourage the UK’s 35 million motorists to carry out basic car maintenance tasks like checking oil levels, after it was revealed that 17% of UK drivers were risking an average repair bill of £1,413 by never checking their oil, while a staggering 1 in 5 cars on the road has so little oil in the engine that it is perilously close to suffering a catastrophic breakdown.

Mobil 1 pledged its support to the National Oil Check Week campaign along with Esso service stations and Halfords, the UK’s leading car parts and accessories store.