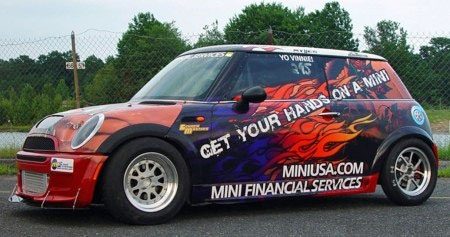 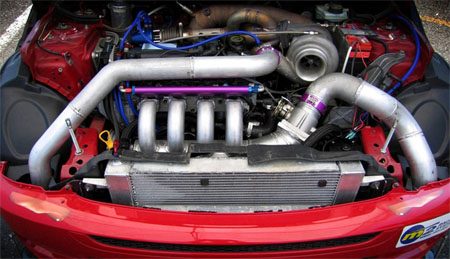 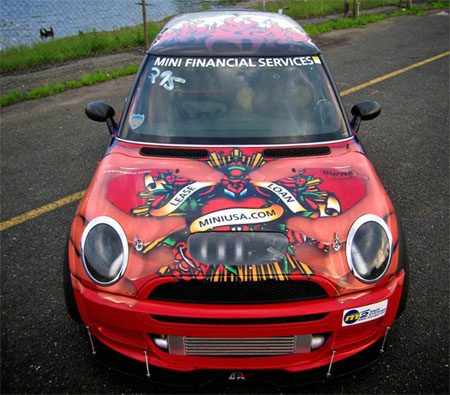 Officially the “World’s Quickest and Fastest MINI”, this Cooper S Hardtop has clocked a record-setting 10.48 elapsed time at 135.16 MPH, but not before sending home a Big-Block-equipped Camaro with a blistering start from PINKS ALL OUT host Rich Christensen’s “Arm Drop.” This incredible performance resulted from the collaboration between ABF Performance, MINI USA and MINI Financial Services. With its custom carbon-fiber bodywork and distinctive “Get Your Hands on a MINI” graphics (which shows two hands trying to grab the 1,750-pound race car) there is certainly no mistaking this MINI for any other car on the racetrack. Getting the miracle MINI into 9-second zone is just a few suspension tweaks away.

But the fun doesn’t stop at 1,320 feet out. Thanks to the massive R&D that went into building this car, ABF Performance will continue to build on its extensive portfolio of performance parts for street-bound and race-only MINIs. In addition, ABF Performance will keep on designing and building a range of turnkey race cars available for purchase by motorsports enthusiasts. Also, ABF Performance will support a number of Club Racing series at racetracks throughout the U.S., calculated to demonstrate the racing capabilities of the MINI platform, while strengthening the community of MINI enthusiasts and giving them an opportunity to sharpen their driving skills.

Vincent Tennessee Kung, MINI Product Manager, stated, “The collaborative effort between MINI USA and ABF Performance has resulted in record-making power and speed. As the new generation of MINIs makes its way into the hands of racers, we look forward to seeing what the aftermarket can accomplish both on the dragstrip and on the road course.”

Hubie Fuh, Executive Vice President of ABF PERFORMANCE, INC. added, “The new second-generation MINI platform represents a solid and flexible platform for the construction of extreme high-performance automobiles. We look forward to developing the new platform through our signature racing programs and competing at a variety of racing venues, including Drag, Drift, and Road Racing events over the coming years. We also look forward to making the MINI brand one of the most respected in all of motorsports. The combination of MINI’s fundamental engineering and our performance enhancements will help MINI USA and ABF Performance achieves this goal easily.”

The MINI drag racer, a 2002 MINI Cooper S, has been extensively engineered and tuned by ABF Performance and performed flawlessly over one week of grueling competition in tough heat and humidity. The only hiccup for the team was the factory axles, which snapped like toothpicks under Kung’s driving demands and repeated requests of “more power.” Running 38 psig of turbo boost and making 9000 rpm shifts didn’t help matters much either.

ABF Performance, Inc. is the recently-announced joining of forces by the two most respected aftermarket performance suppliers for the MINI automobile, with its base of operations located in Los Angeles, CA. ABF Performance is the official parts, development, technical support, and motorsports affiliate of MINI USA, a division of BMW North America. In this capacity, the company sells original and after-market parts and services to BMW and MINI owners and racing enthusiasts throughout the U.S. For more information about ABF Performance, please visit: www.abfperf.com

MINI in the US

MINI is an independent brand of the BMW Group. In the United States, MINI USA operates as a business unit of BMW of North America, LLC which has been present in the United States since 1975. Rolls-Royce Motor Cars NA, LLC began distributing vehicles in 2003. The BMW Group in the United States has grown to include marketing, sales, and financial service organizations for the BMW brand of motor vehicles, including motorcycles, the MINI brand, and the Rolls-Royce brand of Motor Cars; DesignworksUSA, an industrial design firm in California; a technology office in Silicon Valley and various other operations throughout the country. BMW Manufacturing Co., LLC in South Carolina is part of BMW Group’s global manufacturing network and is the exclusive manufacturing plant for all Z4 models, X5 Sports Activity Vehicles and X6 Sport Activity Coupes. The BMW Group sales organization is represented in the U.S. through networks of 338 BMW passenger car centers, 335 BMW Sports Activity Vehicle centers, 142 BMW motorcycle retailers, 82 MINI passenger car dealers, and 30 Rolls-Royce Motor Car dealers. BMW (US) Holding Corp., the BMW Group’s sales headquarters for North, Central and South America, is located in Woodcliff Lake, New Jersey.