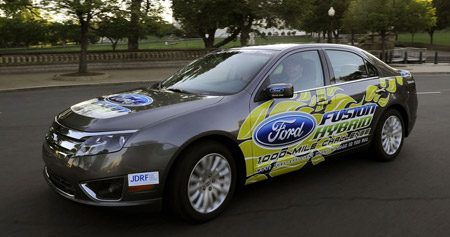 * The demonstration of the Fusion Hybrid’s ultra high-mileage potential also raised more than $8,000 for the Juvenile Diabetes Research Foundation

WASHINGTON, April 28, 2009 – Drivers trained in mileage-maximizing techniques such as smooth acceleration and coasting to red lights were able to get an extraordinary 1,445.7 miles out of a single tank of gas during a fund-raising effort in Washington, D.C. that concluded today. They did it by averaging 81.5 miles per gallon in an off-the-showroom floor, non-modified 2010 Ford Fusion Hybrid, the most fuel-efficient midsize car in North America – nearly doubling its U.S. certified mileage.

The Fusion Hybrid 1,000-Mile Challenge started at 8:15 a.m. EDT on Saturday, April 25, from Mount Vernon, Va., and ended this morning at 5:37 a.m. on George Washington Parkway in Washington, D.C. After more than 69 continuous hours of driving, the Fusion Hybrid finally depleted its tank and came to a stop with an odometer reading of 1,445.7 miles – setting a world record for gasoline-powered, midsize sedan.

“Not only does this demonstrate the Fusion Hybrid’s fuel efficiency, it also shows that driving technique is one of the keys to maximizing its potential,” said Nancy Gioia, director, Ford Sustainable Mobility Technologies and Hybrid Vehicle Programs. “The fact that we were able raise much needed funds for JDRF while raising the bar on fuel efficient driving performance made the effort doubly worthwhile.”

Maximizing mileage
A team of seven drivers prepared for the challenge by learning a few mileage-maximizing techniques, most of which can be used in any vehicle to improve fuel economy, but are especially useful in the Fusion Hybrid where the driver can take advantage of pure electric energy at speeds below 47 mph.

CleanMPG.com founder Wayne Gerdes, an engineer from Illinois who coined the term “hypermiling” to describe the mileage-maximizing techniques, provided the pointers. They include:

Slowing down and maintaining even throttle pressure;
Gradually accelerating and smoothly braking;
Maintaining a safe distance between vehicles and anticipating traffic conditions;
Coasting up to red lights and stop signs to avoid fuel waste and brake wear;
Minimize use of heater and air conditioning to reduce the load on the engine;
Close windows at high speeds to reduce aerodynamic drag;
Applying the “Pulse and Glide” technique while maintaining the flow of traffic;
Minimize excessive engine workload by using the vehicle’s kinetic forward motion to climb hills, and use downhill momentum to build speed; and
Avoiding bumps and potholes that can reduce momentum
“You become very aware of your driving because you’re constantly looking for opportunities to maximize mileage, and a more aware driver is a safer driver, too,” said Gil Portalatin, Ford hybrid applications manager.

In addition, it is important for Fusion Hybrid drivers to manage the battery system’s state of charge through the use of regenerative braking and coasting, and balancing the use of the electric motor and gas engine in city driving to avoid wasting fuel.

Fusion Hybrid drivers also can stay more connected to the hybrid driving experience with Ford’s SmartGaugeTM with EcoGuide, a unique instrument cluster that helps coach drivers on how to optimize performance of their hybrid.

The Challenge
The Fusion Hybrid 1,000-Mile Challenge team took turns driving several routes in and around the national capital over the course of approximately three days and nights. The route involved elevation changes, and ranged from the relatively open George Washington Parkway to a 3-mile stretch in the heart of the city that is clogged with roughly 30 traffic signals.

“The Fusion Hybrid works brilliantly,” Gerdes said. “When you don’t need acceleration power while driving around town, the gas engine shuts down seamlessly. There’s not another hybrid drivetrain in the world that does that as effectively. The Fusion engineering team really knocked it out of the park.”

“It was exciting to be an active part in this challenge. The fact that it will help spread the word about the Fusion Hybrid’s great mileage, and help out a great charity, makes it even more special,” said Edwards, whose ‘99’ team has used fuel-saving techniques to win races. “There’s no question that the Fusion Hybrid will help consumers save fuel when they drive it. Having driven the car, I feel strongly about how great it is – so strong that I’ve purchased one myself.”