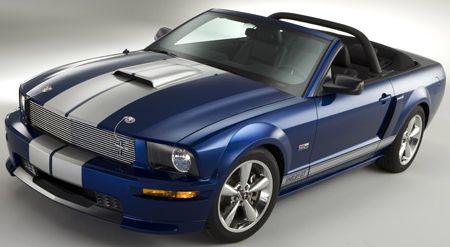 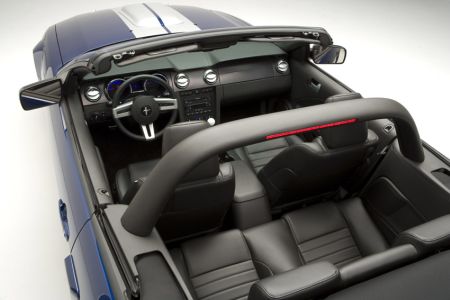 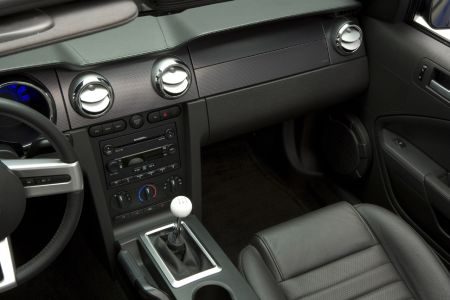 DEARBORN, Mich., June 13, 2007 – The magic duo of Ford Mustang and Carroll Shelby bring open-air excitement to the road for the 2008 model year as the Ford Shelby GT returns with a new convertible body style and a new standard color combination. Like all Shelby Mustang models, production will be limited to assure exclusivity for collectors. The 2008 Shelby GT coupe and convertible will be available from select Ford dealers beginning in August 2007.

The 2008 Ford Shelby GT convertible is being formally introduced to Shelby and Ford enthusiasts at the annual Mid-America Ford Performance and Shelby Meet, which opens today in Tulsa, Okla.

“The Shelby GT was engineered for people that put performance first,” said Carroll Shelby. “Working with Ford Racing, we created this Shelby to be an everyday driver that’s tuned for fun at the track. Those who value a well-balanced package will appreciate it. Those who don’t will be left behind staring at its tailpipes.”

In 2007, Ford Division, Carroll Shelby and Ford Racing joined forces to create a retail version of The Hertz Corporation Shelby GT-H coupe called the Ford Shelby GT. Fewer than 6,000 2007 models were built and all were available only in Performance White or Black.

For 2008, the highly-coveted Shelby GT is available in a new paint combination of Vista Blue with Silver stripes and the choice of two body styles, coupe or convertible.

“The Mustang convertible is the number one selling convertible in the U.S.,” states Robert Parker, Ford Division Car Marketing Manager. “Since t he Mustang program never stands still, we wanted to continue offering consumers what they want, and they told us it was a Ford Mustang Shelby GT convertible. ”

Shelby GT models begin life as a specially-equipped Mustang GT assembled at the AutoAlliance International plant in Flat Rock, Mich. The cars are then shipped to the Shelby Automobiles facility in Las Vegas for transformation before delivery to Ford dealerships nationwide.

“The birth of the Ford Shelby GT was so well received last year, especially by young enthusiasts, that we brought the car back for the 2008 model year,” said Amy Boylan, President of Shelby Automobiles. “The enormous response to Hertz’s Shelby GT-H convertible convinced us to offer customers a drop top Shelby GT. And we had so many requests for blue that we decided to make it our signature color in 2008.”

Every Shelby GT is built to perform and is the result of extensive development. Aerodynamics were key to sculpting t he powerful, unique front fascia with an aggressive lower air dam. The hood scoop comes directly from the famed Shelby Cobra roadster while unique side scoops are positioned just before the rear wheel arches. The rear fascia frames dual exhaust tips, and a Shelby badge graces the trunk lid.

“The partnership between Ford Racing and Shelby demonstrates our ability to work together to deliver some of the most exciting Mustang’s ever built,” said Jamie Allison, Ford Racing Performance Group Manager. “Ford Racing has a full line of performance parts for Mustang enthusiasts. The Shelby GT convertible is another example of how working together, Shelby and Ford Racing are developing, producing and delivering niche performance Mustangs directly to the customer.”

Under the hood, the engine is improved with a Ford Racing Power Upgrade Package to increase output of the 4.6-liter V-8 to 319 horsepower and 330 lb.-ft. of torque. A high-flow exhaust system with X-pipe crossover offers better power delivery and a throaty V-8 exhaust note. Shelby GT comes standard with a five-speed manual transmission featuring a Hurst short-throw shifter for precise shift action. A five-speed automatic transmission is optional.

The 2008 models will sport 18-inch polished wheels with high-performance P235/50ZR18 BF Goodrich gForce tires to maximize the upgrades. Like all Mustang convertibles, each drop top will have a stylish light bar and supplemental bracing to give the car additional stiffness.

“The Shelby GT is for drivers,” says Boylan. “We enhanced the motor, the chassis and other bits to make it a fun, balanced car that is equally at home on the street or track. It’s easy to drive, very fast and offers great value for the price.”

Approximately 2,300 Shelby GT coupes and convertibles will be built for model year 2008, available with manual or automatic transmission. Each car will feature an authentication plate on the center dashboard, as well as a matching tag under the hood for documentation in a forthcoming registry. Shelby Automobiles production is scheduled to begin in August 2007. Pricing will be announced as vehicles arrive at dealerships.