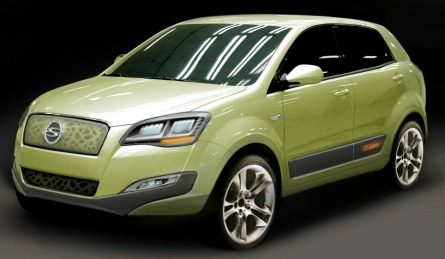 SSANGYONG AT THE SEOUL MOTOR SHOW

Ssangyong will be showing an almost production-ready example of its new C200 crossover utility car at the Seoul Motor Show in South Korea, opening on April 2.

The company says that the C200 unveiled at the show will closely resemble the production C200 scheduled to be launched later this year. SsangYong will also show a new diesel hybrid version of the Kyron.

The C200 concept was first unveiled at the Paris show last October and is the first new model in the broadening of the SsangYong range. The C200 is a modern, contemporary urban passenger car with styling by Giugiaro’s ItalDesign in Italy. It is similar in size to a Toyota RAV4, a Honda CRV and a Nissan Qashqai and with a 2,640mm wheelbase, is slightly longer than a VW Tiguan.

The C200 differs from current SsangYong models in that it uses monocoque construction to ensure a passenger car look, feel and comfort. The platform is adaptable, and the chassis can be used for front wheel drive and four wheel drive passenger cars.

The drivetrain is completely new. An advanced 2.0 litre diesel engine has been designed for lower noise levels and reduced vibration. The engine produces 175 hp and complies with Euro V exhaust emissions requirements as well as producing lower CO2 levels. Manual and automatic transmissions are likely to be available, with the show car having a six-speed auto.

Extensive use of aluminium suspension components reduces weight and together with a low centre of gravity, ensures a comfortable and compliant ride with the kind of sharp and agile handling demanded by European drivers.

Work has already started on the production line for the new car, ahead of schedule.

In general, diesel hybrid cars ensure a good level of energy efficiency and outstanding fuel efficiency in comparison to petrol hybrid cars. As a result, a significant reduction in CO2 and exhaust emissions can be achieved. Hybrid technology minimizes unnecessary use of fuel and the emission of exhaust gases by ensuring that a car’s engine is stopped when the car stops, such as at a red light. When a vehicle is being driven, the power of the vehicle is boosted through the e-motor to improve the vehicle’s performance. When a vehicle is slowing down and under braking, surplus energy is used to charge the battery.

SsangYong’s diesel hybrid technology applies an e-motor to an advanced direct injection diesel engine, with a high-voltage battery supplying electric power to the e-motor. The Torque Split Device (TSD), independently developed by SsangYong, is also applied to combine or cut off the power of the e-motor, thereby enabling hybrid driving.

Last year SsangYong said that tests had shown improvements in fuel efficiency of around 25 per cent in comparison to existing vehicles of the same class. In terms of emissions, there was a reduction of around 10 per cent in nitrogen oxide and around 15 per cent in particulates. The company also said that the completion of the development of a diesel hybrid car will allow for the development of a diesel hybrid technology that ensures a fuel efficiency improvement of at least 30 per cent and a reduction in exhaust emissions of at least 50 per cent.