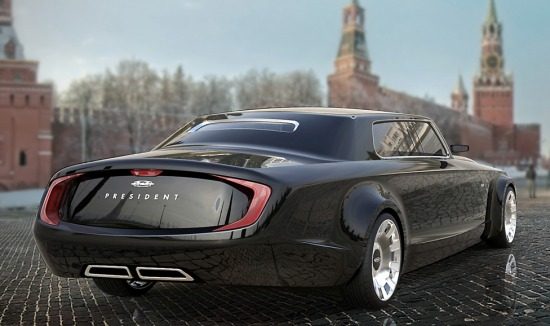 We started this project together as two former student colleagues from our time in Torino. And since we had only three weeks to come up with a good concept we had to work extra systematically to be in contact and to discuss our overall process over 2400 km’s distance while using great tools such as Skype and Dropbox.

So we immediately started out with a quick research of the Russian style and their previous limousines. And we soon agreed to work on a future ZiL version, since it already has a limo-history and we thought it really needs a modern input.

Furthermore we looked a lot into (classic) Russian architecture which has a great history. It holds a majestic style that is full of classicism and it mostly resembles power and authority. Also we took inspiration from key Russian designs, such as airplanes, boats etc…

The next step we had to take was defining our key-words for the concept:

After we had set up the concept, we immediately started a side-view research. After over fifty different side views were made, the car’s character and proportions started to appear. First of all we were looking for the front and back overhangs, surface treatments, angle and placement of A-pillar, greenhouse volume and so on. Everything in accordance to the brief requirements.

The first ¾ views were made in the first days and day by day it became more clear what our car was going to look like. After a week we already started an Alias model, getting clear insights on designing/testing surfuces and treatments in a 3D environment.

To refresh ourselves from the limo, we were searching for an image/idea of the VAN and SUV designs required for the competition.
For the SUV we decided to take some style elements coming from the limousine, but we also agreed it doesn’t have to be a copy. Maybe more like a cousin then a brother in this little Zil family.
The base we used for the SUV is the GAZ military vehicle, which has a very strong and powerful appearance and could actually be a solid base for an SUV.
It has to give a rigid and kind of muscled feeling, and with a more geometric surface treament it provides the rigidy we are looking for. A soldier in a slim-fit suit.

For the minivan we used the same philosophy as for the SUV, the only difference is that it could be a little less rigid and aggressive as the SUV. It maybe has a bit more similarities to the limousine, if you look at the grill and front window style elements. Also the long side ‘fold’ or cut in the lower section of the side panels refer to the limousine. And the long sleek side windows give the van the ‘authority’ it needs to have.

And now to continue on our limo concept development, we want to highlight some style elements of the car:

When starting we worked from out a 4+2 configuration for the car to still keep the agile feeling of such a big machine. And powered by a large volume combustion engine in the front, it will create a long stretched bonnet to mark it out from other vehicles in the segment. A long bonnet visually stretches the car, gives more dynamism to the silhouette and could refer to yachts. It makes the overall image more recognizable.

An almost vertical A-pillar, wide C-pillar and low window-loopholes (direct interpretation from medieval Russian castles) gives a feeling of an extremely high protectability. And the window frames are finished with aluminium to emphasize thickness of armoured body.

The third volume a bit ‘lifted’ gives an image of lightness and elegance. The two lines on the side shaping the body over the full length supports this image. The shoulder line helps emphasize positiveness of the volume, and the wheel arch muscles and its sharpness gives a feeling of quality, precision and technological effectiveness.

From the front, the limo is following the recognizable ZiL style in a more modern fit. And at the back view we tried to implement a fresh solution to the rectangular section of the boot by creating a small separate volume. Showing an image of lightness and agility.

Our goal was to create an unmistakable limousine for the first person of the state. This limousine’s DNA doesn’t contain the momentary conjecture but an object that embodies continuity of the history, culture and achievements of a great country where technology has always been very important. An object that deserves the right to be named ‘car number one’ of the modern and agile state leader of Russia.