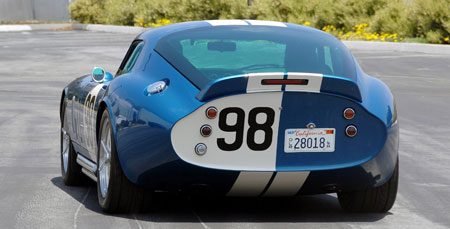 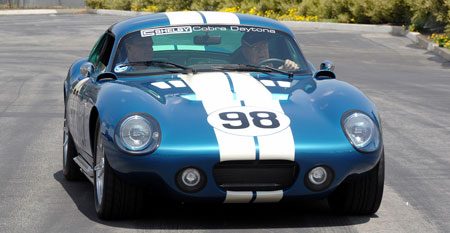 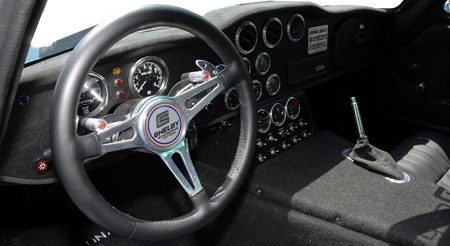 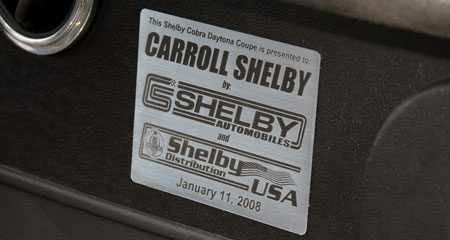 Irvine, CA – On Monday, April 21, Shelby Distribution USA presented automotive legend Carroll Shelby with a custom Superformance Shelby Cobra Daytona Coupe. This unique gift was made possible by Amy Boylan and the team at Shelby Automobiles in Las Vegas and Lance Stander and the employees at Shelby Distribution USA in Irvine, CA. “It was fantastic to have the opportunity to honor Carroll Shelby with this special car,” said Stander. “We hope he enjoys driving it as much as we enjoyed giving it to him.”

Painted in the same “Guardsman Blue” of the original cars, Carroll’s Daytona Coupe also features the number 98 that represents chassis #2300 that Shelby himself owned up until 1999. Power comes from a Roush 427SR V8 with 480 horsepower and 515 lb-ft torque. Unique to Carroll’s Daytona Coupe is a shifting system that utilizes paddles and buttons on the steering wheel. Developed by MasterShift (www.mastershift.com) of San Diego, the Art Carr 2004R 4-speed automatic transmission can be up shifted via paddles and downshifted using two buttons on either side of the steering wheel. The system also has safety features including a one second delay from Drive to Neutral as well as a speed sensor to prevent the car from being shifted into reverse or park unless it is completely stopped. Installation of the engine, transmission and paddle shift system was handled by Exotic Auto Restoration of Costa Mesa.

History of the Daytona Coupe

The original six Daytona Cobra Coupe factory racers enjoyed a short but impressive racing career: Originally built for the 1964-65 for the 1964-65 racing season using 289 Shelby Cobra roadster chassis, these were America’s answer to Ferrari’s highly successful 250 GTO. In their first year of competition, the Daytona Coupes won the GT class at Sebring and then placed 4th overall at Le Mans. They proved to be so competitive that Ferrari officials, fearing a loss of the championship, managed to get the Monza, Italy final round cancelled, knowing the Daytona’s would win the race and the Championship. Consequently, Ferrari claimed the 1964 FIA World Manufacturer’s Championship. The following year Enzo Ferrari, realizing he would lose to the Daytona’s, pulled his factory support from the GT program, paving the way for the Daytona Coupe walkover. In 1965, the ex-Shelby Daytona Coupes of the UK’s Alan Mann racing team won the FIA’s World Manufacturer’s GT title with ease.

Almost 40 years later, Superformance has re-created this nostalgic player in American racing history. The Coupe is a Carroll Shelby licensed product and was designed by some of the original team, including Peter Brock and Bob Negstad. The Coupe boasts amazingly sleek lines and a contoured body which is slightly larger than that of the original race car. The original suspension was further engineered and improved and the interior space was optimized for more room. Addding value to this impressive Daytona is the fact that it is also eligible for the Shelby American Automobile Club owners registry, capturing each chassis number as a part of American history.